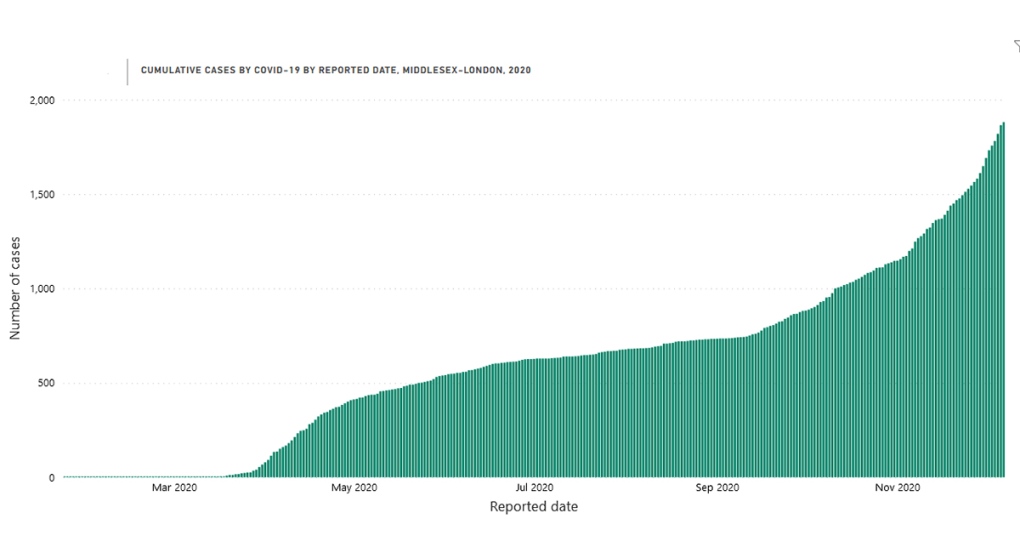 The cumulative number of COVID-19 cases in the London region as of Dec. 7, 2020 are seen in this graph from the Middlesex-London Health Unit.

That’s roughly a third of the 45 cases reported Monday, which when reported was the second-highest daily count since the pandemic began in March. The highest single day was originally reported as 46 cases last week.

Health officials have said that new cases are increasingly the result of community spread, not part of ongoing outbreaks at the London Health Sciences Centre’s (LHSC) University Hospital.

The hospital is reporting a total of 72 patients and 61 staff have tested positive as a result of the outbreaks as of Tuesday. That’s one new patient case and one new staff case in the past 24 hours. The total number of deaths held at 13.

In terms of active cases, 57 patients – seven in critical care – and 52 staff are currently positive for the illness.

Outbreaks continue at St. Maguerite d’Youville Catholic School and two residences at Western University, though there have been no new cases reported recently associated with the outbreaks.

Here is where the cases stand in the region based on the most recent publicly available data, no new deaths were reported Tuesday:

Across Ontario there was a dip in cases, with fewer than 1,700 infections reported just a day after a new record was set.

COVID-19 vaccines have expected side-effects, but experts say they're no cause for concern

Whose responsibility is it to keep track of who has been vaccinated for COVID-19?

Who should get Canada's first COVID-19 vaccines, the most vulnerable or superspreaders?

First Pfizer vaccine shots to be given right at delivery sites, not LTC homes: Tam

U.S. virus deaths hit record levels with the holidays ahead

Trump signs order to put Americans at head of vaccine line, vows to work with world

Ontarians could face restrictions if they refuse to get COVID-19 vaccine, health minister says

90-year-old grandmother, William Shakespeare are first in U.K. to get COVID-19 vaccine