The high-rise building boom in downtown London, Ont. shows no sign of slowing down.

Holoway Lodging, the owner of the DoubleTree by Hilton, is seeking to rezone the property where its parking garage stands at the northwest corner of King and Waterloo streets.

An application submitted to city hall seeks permission to build a 35-storey, 435 unit, mixed use residential building at 300-320 King Street.

“Thirty-five [storeys], that’s a big tall building!” said neighbour Mike Couture. “We need that kind of development downtown and to support the businesses.”

Towering 110 meters above the ground, the new building would be among the tallest in southwestern Ontario.

However, a skyscraper on that specific property creates a unique challenge. 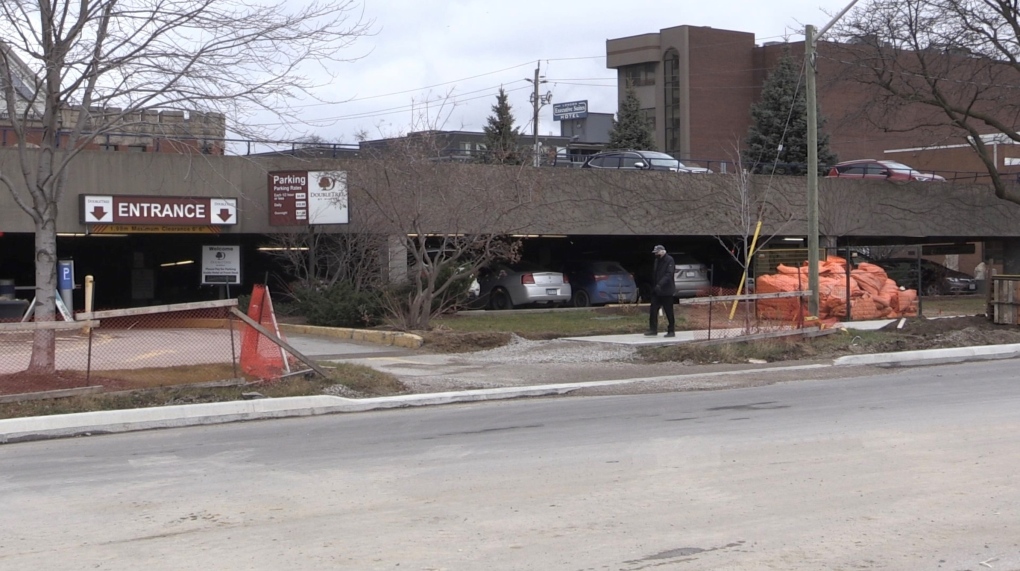 The parking garage that would be demolished to accommodate a new skyscraper in London, Ont. (Daryl Newcombe/CTV News London)

It would block a line-of-sight communications signal from the top of the City Centre building to London Police Services headquarters in Old East Village.

A consultant’s report recommends either installing a relay link or relocating all the police communications equipment onto the new building.

“We need to make [downtown] a community where people live if we are going to see downtown revitalization,” explained Deputy Mayor Shawn Lewis.

Speaking about London’s housing targets to address the current crisis, Lewis said the southeast area of downtown London is in need of intensification.

He’d like to see more applications for parking lots and underutilized properties near the RBC Place Convention Centre.

“This is exactly the type of development that was envisioned when King Street was designated as a rapid transit corridor,” he said. “This is not only a win for our housing targets, but in terms of the overall burden on infrastructure and what it means for the property taxpayer — it’s a win for them as well.

The rezoning request for the 35-storey high rise will be considered by city council in the new year.

Search teams and emergency aid from around the world poured into Turkiye and Syria on Tuesday as rescuers working in freezing temperatures dug, sometimes with their bare hands, through the remains of buildings flattened by a magnitude 7.8 earthquake. The death toll soared above 5,000 and was still expected to rise.

China said Tuesday it will 'resolutely safeguard its legitimate rights and interests' over the shooting down of a suspected Chinese spy balloon by the United States, as relations between the two countries deteriorate further. The balloon prompted U.S. Secretary of State Antony Blinken to cancel a highly-anticipated visit to Beijing this week that had offered slight hopes for an improvement in relations.

John Benoit of West Jeddore, N.S., says he has been beachcombing for over 50 years, but his most recent discovery -- a Killick anchor -- is by far his most memorable.

Will Biden's second state of the union mark a less protectionist approach to Canada?

A new poll suggests a majority of Canadians still see the United States as their country's closest ally, even in an age of isolationism and protectionist policies.

Vaccine uptake higher among people who knew someone who died of COVID-19: U.S. survey