LONDON, ONT. -- It wasn’t an easy decision to pause the Neighbourhood Rink Program for the City of London according to the city’s manager of neighbourhood strategic initiatives and Funding, Trevor Fowler.

"When we had the chance to really dig in, and look at them in the context of what the implications were with respect to local health guidelines, to the city’s commitment to doing all we can to prevent the spread of COVID-19."

The neighbourhood rink at Westmount Lions Park is the only one of the program to actually open before the province’s 'Stay at Home' order; it is now closed, surrounded with yellow caution tape. The other five rinks that were in various stages of development have been put on hold until the order has been lifted.

The half doesn’t effect back yard rinks however, and those have been popping up around the region. Derek Barth from Strathroy started building a rink for his kids last year, but thought it was especially important during the pandemic.

"It’s one of the few things they can do," says Barth who says it as been getting a lot of use already by his two sons. 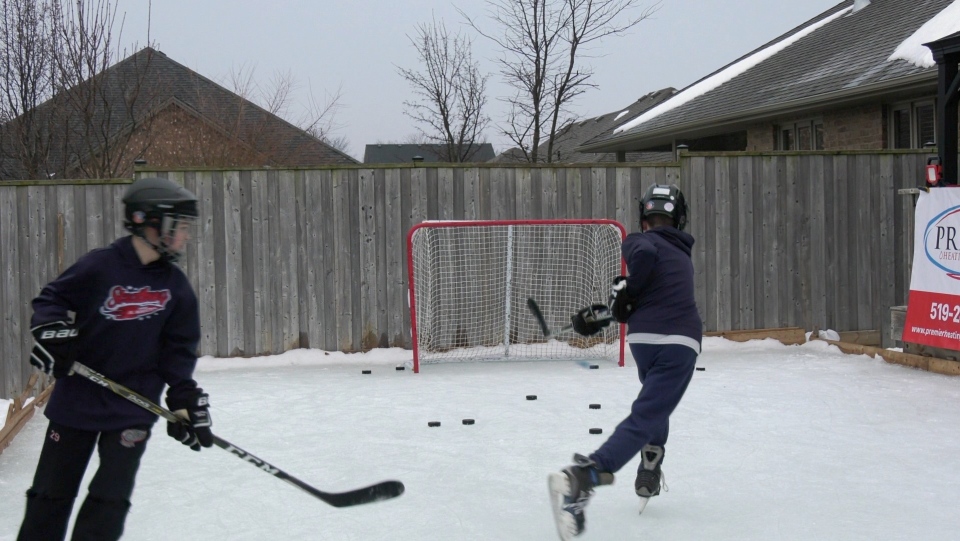 "They come out in the morning time, and then in the night time, I put out some LED lights so they are able to skate until bedtime."

Barth has to keep a regular schedule of scrapping the ice and nightly flooding to keep it smooth and ready for the next day, but doesn’t mind the extra work if it keeps his kids off of their devices for a while.

"I don’t think the kids realize how much work it takes, for me to maintain the ice rink and get it going for them. But it’s worth it in the end when you see them out here using it all the time."

Under the provincial regulations, you are not allowed to invite anyone over for a skate, but Barth’s kids have been able to distantly socialize with another neighbour.

"Our neighbour back here, also has an outdoor rink. And sometimes the kids scream at each other over the fence, but during the pandemic we can’t interact or have our children on each other’s ice. So that’s the best they could do," says Barth.

With the 'stay-at-home' order expected to last until mid February at the earliest, there might not be much of a skating season left when it’s finally lifted. So more and more people are creatively finding ways to do the things they enjoy, without leaving home.