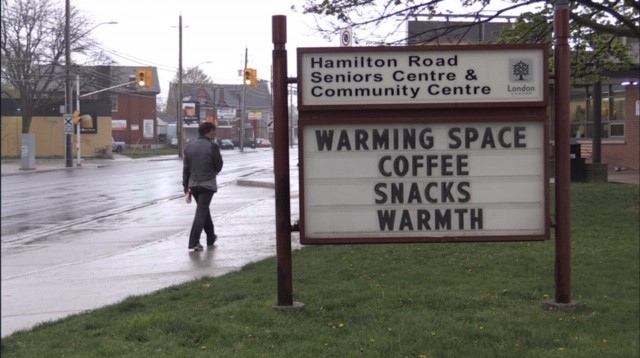 On Tuesday, city council decided to kept the temporary overnight shelter on York Street and the daytime resting space inside the Hamilton Road Senior Centre open until June 30, a two month extension.

The extension will provide more time for residents to be connected with permanent housing.

“I think we did the best job we could with a situation that required an immediate response,” Councillor Shawn Lewis told his council colleagues. “However, I do believe there have been some learning opportunities.”

Frustrated neighbours say since the daytime space opened on Hamilton Road in December, they’ve had to pick up hundreds of discarded needles.

“We made it very clear to city hall that there’s a problem with the needles, they’re everywhere,” explains Cindy Davis. “Shoppers Drug Mart has given us special containers to put them in, and we go around very careful and pick them up with tongs.”

So Council agreed to increase needle collection within 100m of the two sites, and if granted permission, staff will also collect needles on private property up to 300 metres away.

Typically, discarded needles are the responsibility of the property owner.

“Thanks to the community for bringing those concerns forward, I think they will inform what the response is going to look like into the future,” said Councillor Phil Squire.

Councillor Jesse Helmer added that requests for enhanced needle collection come from other neighbourhoods as well.

“I think it is needed and it will be helpful, but when we have other requests, how are we going to handle those in other areas?” Helmer asked city staff.

Extending the emergency winter shelter program beyond the first day of summer isn’t what Cindy Davis and her neighbours wanted, but she acknowledges people facing homelessness need somewhere to go.

“It is a success if you are offering them a cold beverage, a snack. But its the aftermath of it all that neighbours are left to deal with.”