'My pride stands in my way of asking my family for help': Man deals with being evicted from a woodland encampment

'My pride stands in my way of asking my family for help': Man deals with being evicted from a woodland encampment

City officials say compassion and care is key to their response to homelessness, but health and safety also have to be factored in.

All of those issues were front and centre as crews began dismantling an encampment on the west edge of downtown London, Ont. on Tuesday.

It's a location city officials have visited on numerous occasions, but now they are taking steps to remove it completely.

Anthony Featherston says he is currently the lone camp occupant, telling CTV News London, "The crew came in and told me I had too much stuff and they evicted me from the site and told me I needed to move."

A large contingent from the City of London’s Coordinated Informed Response Team were on hand at Evergreen Park around 10 a.m. Tuesday, but left shortly after the CTV News London cameras arrived.

According to Featherston, "One gentleman came down and told everybody, 'Pack-up, let’s go the news crew's here,' and then they granted me a few more days to pack up the rest of my belongings." 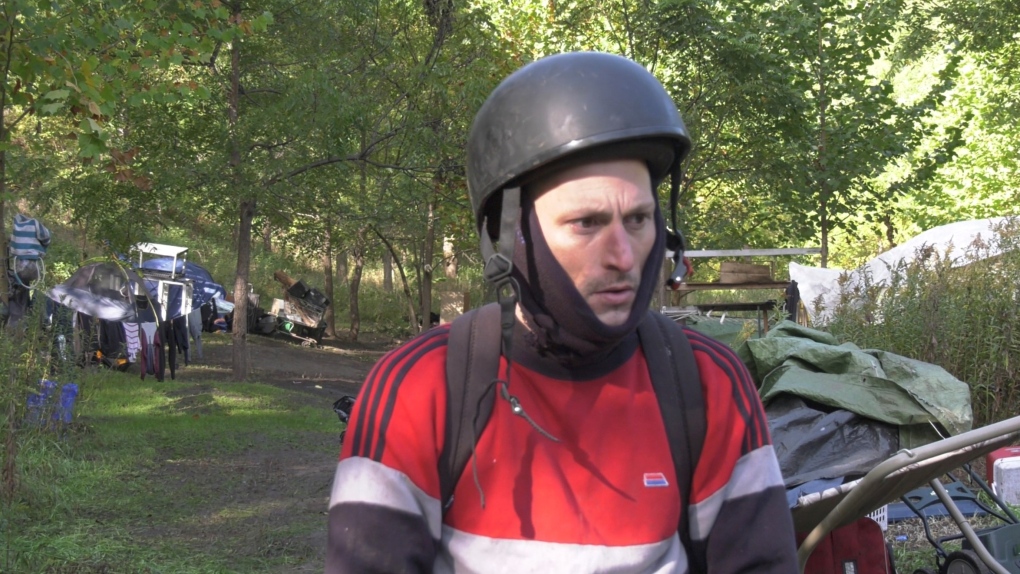 The city issued a statement noting their work with London Cares to remove debris from the site.

A portion of the statement reads, “There was also evidence of fire pits at the site. Staff have removed a significant amount of both garbage and sharps from the site in the past,” adding that there continued to be sharps, food waste and debris at the location.

The statement continued, “As a result, and at the request of London Cares, notice to remove their belongings and leave the site was posted last Thursday, with the deadline of today.”

CTV News London spoke with several people who live on streets near Evergreen Park. No one wanted to be identified but say there have been a number of concerning — sometimes unsettling — incidents. They believe many are linked to encampments along the river.

A young mother pushing a stroller explains, "We're not totally sure if it's people from down there, but my husband’s work van got broken into on Friday and all his tools were stolen."

Another man, standing on his front porch, recounted an encounter with a nude male three months ago.

"A knock on your side door at seven in the morning, stormed in the house. My girlfriend had just enough time to get him out of there, buck naked,” he says. “It appears that they're taking wire, and burning copper wire — burning the insulation off of it — and you can smell it up the street."

The young mother meanwhile says she does have sympathy for people facing difficult times.

"I believe in the compassionate care removal or trying to figure out where they can go but, at the same time, it's not really great that they're taking over spots like that,” she says.

As for Featherston, he admits he has struggled with addictions and has had run-ins with the law in the past, but says he is working now and he knows there is help available.

"I do have lots of support,” he says through tears. “My pride stands in my way of asking my family for help."

TD Bank Group says it paused the MyMoney lending program it recently launched with Canada Post after it detected suspicious activity on its system.

Arrest made in gruesome 1983 murders of 2 Toronto women

Canada's transport minister says the federal government and the country's aviation sector are working on strengthening the passenger bill of rights following a summer plagued by delayed and cancelled flights.

A semi driver was caught with open liquor in Surrey, B.C., was handed a 90-day driving prohibition and has had his truck impounded, according to Mounties.

Ontario passes housing bill despite criticism from municipalities over funding

The Ontario government has passed housing legislation that overrides some municipal zoning laws and eliminates some development fees in an effort to follow through on the province’s goal of building 1.5 million homes.