LONDON, ONT -- For the first time in more than a decade, the Mustangs are taking their brand of hockey off campus.

They will play the Guelph Gryphons Thursday night at Budweiser Gardens in a game billed as the 'Faceoff at the Forks'.

"It creates an event for the campus and city, and that's what we've been trying to work on," says Mustangs head coach Clarke Singer. "We've had school day games, and this is a chance to engage with the campus community and Londoners."

Inspired by the Thames river that runs through both campus and the downtown, the Mustangs will return to the iconic downtown facility. Fifteen years ago, they had the idea to showcase their product in front of a bigger audience and it paid off.

"Moving all the equipment was a nightmare, but we drew fairly well," added Singer.

"Now to go back and relieve that will create an event an environment will be a special evening." 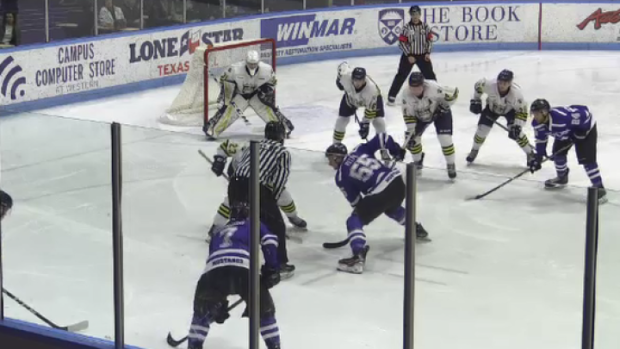 The evening will also be special for a number of the players. A large percentage of the roster were OHL'ers who played multiple times in the 9000 seat venue.

"That was always a big thing for me, to be able to play there," says Ethan Szypula, a Londoner who played for the Owen Sound Attack. "Being in the Western Conference we played there three times a year. We played (the Knights) twice in playoffs and in my last year we swept them. To do that in front of family & friends, that was a great sendoff. "

Anthony Stefano was part of a big rivalry between London and Windsor as a member of the Spitfires.

"It was a huge venue," remembered Stefano. "In my first or second year I scored a goal there against (Anthony) Stolarz. That was a great Knights team that had (Max) Domi and (Christian) Dvorak."

The Mustangs typically draw around 200 people per game at Thompson Arena. They've been working hard to market this contest, which has included engaging with students, faculty, and the London community.

"They've marketed the game on social media, and advertised with signs around the arena, and in parking lots, so I’ll think we'll have a good crowd," says Singer.

He added that a number of the top programs in USport have tried events like this, but it typically takes a few years to build up a following and fan base.

"If we can get a few thousand people, then we can build on it," says Singer. "Then as the 'Faceoff at the Forks' becomes more well known, it will be something we can look forward to as the years progress"