It's been a deadly commute on area roads, and OPP are dealing with multiple crashes including one involving more than 20 vehicles on Highway 401.

Oxford County OPP closed 19th Line in Zorra Township between Road 92 and Road 96 after a fatal crash shortly before 7:30 a.m.

It’s not clear what caused the fatal collision, but the road has since reopened.

Also in Oxford County, Highway 401 eastbound was closed from Highway 403 to Drumbo Road after a multi-vehicle crash around 1 p.m., possibly involving more than two dozen vehicles.

There were no serious injuries, but it took until around 6:30 p.m. to clear all the vehicles involved and reopen the roadway.

Meanwhile in Elgin County, OPP briefly closed the eastbound lanes of Highway 401 at Furnival Road, southwest of London, after a serious collision involving two tractor trailers and an SUV.

Also Wednesday, Lambton County OPP were reporting numerous collisions, including at least two on Highway 402 that closed all lanes.

The eastbound 402 has been closed due to a multi-vehicle accident near Airport Road around 2 p.m.

OPP say an officer was taken to hospital with minor injuries after being struck while he was out of his cruiser, while another driver had to be extricated by Sarnia fire crews and was transported to hospital with non-life-threatening injuries.

The westbound lanes of the 402 were also blocked at Utoxeter Road by a jackknifed tractor trailer.

Motorists are reminded to:

As winds pick up, blowing snow is expected to cause hazardous conditions on area roadways into Wednesday night. 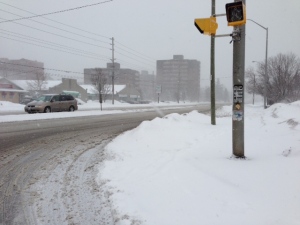 Digging out after March snowstorm