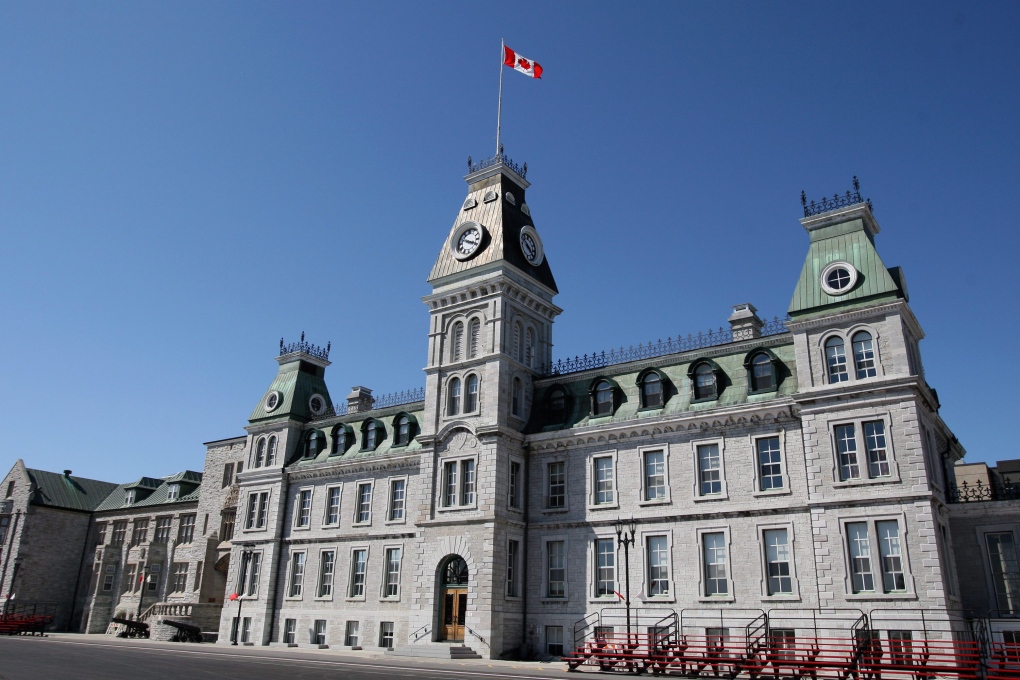 The Mackenzie building with the clock tower face the parade square at the Royal Military College of Canada in Kingston Ont., on Friday May 17, 2013. (THE CANADIAN PRESS / Lars Hagberg)

The mother of London youth who died while attending the Royal Military College has joined  two other families in voicing frustration with the Department of National Defence.

They say a final report stemming from an internal inquiry looking into the deaths of three RMC students was expected a year ago.

Formal hearings ended in early 2017, and the families of 22-year-old Harrison Kelertas, 20-year-old Brett Cameron and 19-year-old Matthew Sullivan were told a final report would be released soon after.

Cameron started his studies at RMC in 2014 after serving as an air cadet in London, where he pursued an early passion for flying. Music was also a critical part of his life; he was a graduate of a local choir school.

"We are now at this point extremely frustrated, extremely upset," said Cameron's mother, Angela Cameron-Jolly, fighting back emotions as she spoke about her son.

"There is no closure. The details of my son's death are still 'suspected suicide.' That is unacceptable as far as I'm concerned. And yes, we're waiting. And we've been very patient."

The investigation was extremely complex, involving 90 witnesses and 30,000 pages of documents, and the results are currently undergoing a legal review, with the hope they will be released later this summer, said Lt.-Gen. Charles Lamarre, the chief of military personnel.

"I wish I was in a position to say that we have finalized the whole legal review," Lamarre said. "But, unfortunately, it's still taking us some time."

The mothers of the three students, who until now have remained largely silent, are demanding to know what happened to their sons -- and what is being done to prevent similar tragedies.

Kelertas, Cameron and Sullivan were all military cadets as teenagers and had a long-standing interest in attending the prestigious Royal Military College of Canada in Kingston, Ont. They were also all accomplished in their own way.

The Defence Department ordered a formal board of inquiry shortly after Kelertas's body was found in his college dorm in April 2016, only weeks before he was due to graduate. The cause of death was listed as suspected suicide.

The inquiry was expanded a couple weeks later when Cameron, who was in the same unit as Kelertas and considered the older student a mentor, also died at the college of suspected suicide.

It was expanded yet again in August 2016, after Sullivan, who had spent months in a "holding platoon" doing odd jobs while waiting to be medically released, died the same day that he returned home to Saint John.

Alexandra Sullivan says her son was suffering from depression and anxiety, which he developed after arriving at the college.

This isn't the first time the military has come under fire for incomplete boards of inquiry; in 2013, it was revealed that dozens of inquiries into suspected suicides by military personnel were unfinished -- including some that were nearly five years old.

Lamarre defended the most recent delay, saying: "As soon as you talk about the death of a person, you're trying to determine what occurred, and if there was anything that did occur that was within the parameters of being illegal.

"And, of course, there is the aspect of the sheer volume of these three deaths combined together: 30,000 pages to review, all of the interviews that took place -- all of this is something that (the legal officers) must see."

Yet some of the mothers expressed fears that the review was more about whitewashing the findings to protect the military and hide any wrongdoing at the college and among senior leaders, which Lamarre denied.

"I think they either are aware of things that need to get changed and they don't want it public," said Alexandra Sullivan, "or they're trying to put a spin on it to make it look more favourable."

In the meantime, the families continue to wait for answers. That she still doesn't know the details surrounding her son's "suspected suicide" doesn't sit well with Julie Kelertas, who said her son appeared excited to graduate.

"For us, for his friends and for a lot of people who knew him, it was a complete surprise," she said.

"There was absolutely no indication that something could have been wrong. We still don't know what really happened. It's hard to talk about it because there's doubts in my mind and that's why we're so insistent on seeing this inquiry report."

There is also a need to know what the military will do to ensure other families don't have to go through the same anguish.

Alexandra Sullivan wants to see more communication between families and the college as well as better training for staff, particularly when it comes to dealing with -- and supporting -- students like her son who are clearly struggling.

"We're disappointed because the point of going to the inquiry was to get some closure, get some answers, and have the army makes changes so this doesn't happen to anyone else," she said.

"That's what they told us. And that's what I'm waiting on."