More than 50 new cases total reported by MLHU and SWPH 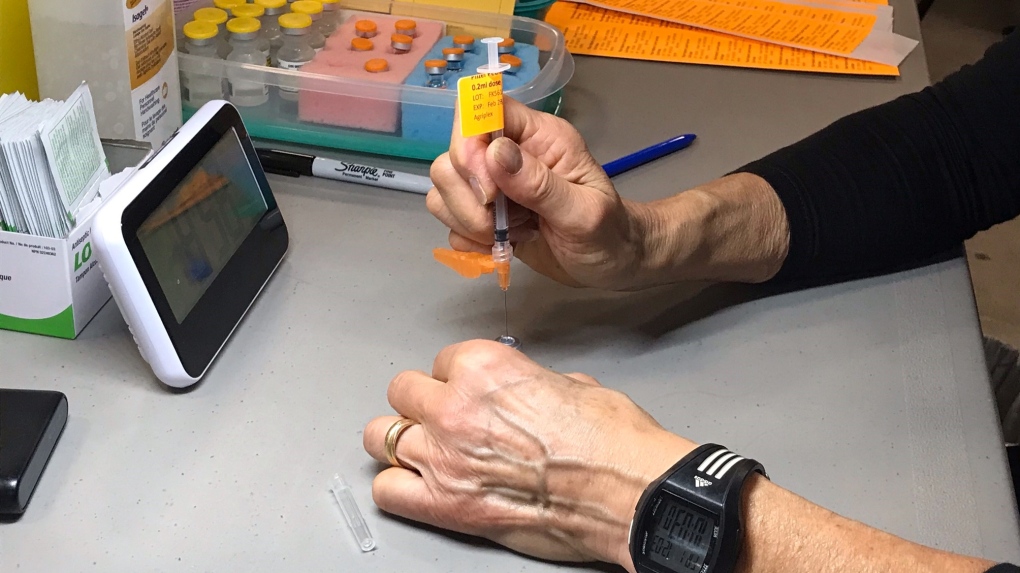 A dose of the Pfizer-BioNTech vaccine for children is prepared at the Western Fair District Agriplex mass vaccination site in London, Ont., on Friday, Dec. 3, 2021. (Sean Irvine / CTV News)

This marks a third day of rising cases in Middlesex-London and a return to higher case counts in Elgin and Oxford counties.

Middlesex-London now has a total of 14,975 cases and 252 related deaths (none new), with 14,530 cases resolved leaving 193 active. The seven-day moving average climbed to 19.3 from 18.9 on Thurday. Friday's count is the highest since mid-September.

Of the cases with an episode date in the past six weeks, 48.9 per cent are among the unvaccinated, partially vaccinated or those not yet protected by the vaccine. The same group also accounts for 55 per cent of hospitalizations and 71.4 per cent of deaths.

The London Health Sciences Centre says it is caring for 13 inpatients with COVID-19, five fewer in the last 24 hours, while the number of cases in in adult Critical Care dropped by two to six.

Outbreaks continue at Western University's Saugeen-Maitland Hall Residence with nine confirmed and one probable case as of Thursday, and Fanshawe College's Merlin House Residence which has seen three cases.

A new outbreak was declared Friday at Tecumseh Public School in London, which reportedly has three cases.

Meanwhile SWPH is reporting 29 new cases for a second day in a row in Elgin and Oxford counties. Currently, eight patients are in hospital, no change from Thursday, and five remain in Critical Care.

The majority of active cases are in St. Thomas, which has 55 active cases, followed by Woodstock with 30 and Tillsonburg with 27.

An active outbreak at the Aylmer Retirement Residence has been declared over while an outbreak at Caressant Care Bonnie Place in St. Thomas continues with seven cases to date.

An outbreak at Westfield Public School in Tillsonburg has been declared over.

Health officials in Grey-Bruce have declared a community outbreak after a number of cases linked to a field party near Holstein on Nov. 27.

So far three cases have been linked to the event, which reportedly had roughly 100 people attend, and Public Health Grey Bruce  says all who attended are considered high-risk contacts and should isolate and get tested immediately.

For the first time in six months, Ontario health officials reported more than 1,000 new COVID-19 cases across the province.