'We are like the referee between two factions at war'; Londoner recognizes National Peacekeeper Day

LONDON, ONT. -- It is a significant day in Canadian Military history.

Annually, Aug. 9 is marked National Peacekeepers Day in remembrance of nine Canadian peacekeepers who were killed when their aircraft was shot down over Syria during a resupply mission.

It was the largest single-day loss of Canadian Armed Forces personnel in a peace support operation.

"Generally our mandate was to keep the peace and keep the warring factions apart," says George Myatte, a Londoner and former Canadian peacekeeper.

Myatte was part of a team which was recognized with the Governor General Commendation for their United Nations (UN) work in 1992.

"I was one of the first guys in Sarejvo Airport when that was going on in 1992," says Myatte referring to the airport being used for humanitarian purposes during the Bosnian war.

"I was with General (Lewis) Mackenzie at that time. We were posted in Germany when the wall came down, and right when we got back from Gulf War, and then Bosnia started and they sent us into Sarjevo."

The Remember November 11 Association was scheduled to hold a ceremony here at Remembrance Gardens, Sunday. 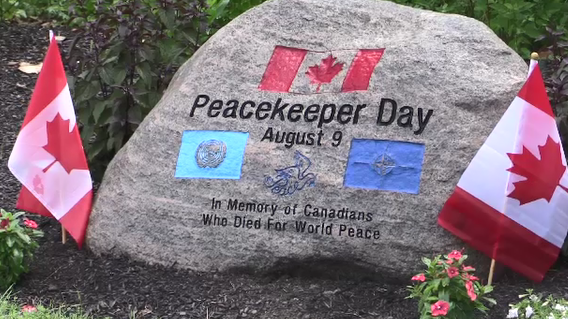 However, rain forced the postponement of the event until Sunday Aug 16 at 1:00 p.m.

"They're our forgotten veterans, and not a lot of people know about these missions," says Sean Wilson of the association.

"Most of these veterans served 10 to 20 years, and they didn't get a lot of recognition or come home to a parade."

Although the ceremony didn’t take place in London because of the weather, others around the country pay their respects.

Myatte says peacekeepers as considered the referee between two sides at war, with the hopes of achieving lasting peace. However he adds there are misconceptions about who they are and what they do.

"You are always a Canadian solider first," says Myatte.

"Then if Canada gets involved in different missions, from Cyprus to Bosnia, Canada will commit their soldiers to that. The same soldiers the day before wearing a green beret, take it off and puts a UN beret on. We are still Canadian soldiers but engaged in UN peacekeeping mission."

Since 1948, 122 Canadian peacekeepers have been killed in service of peace.