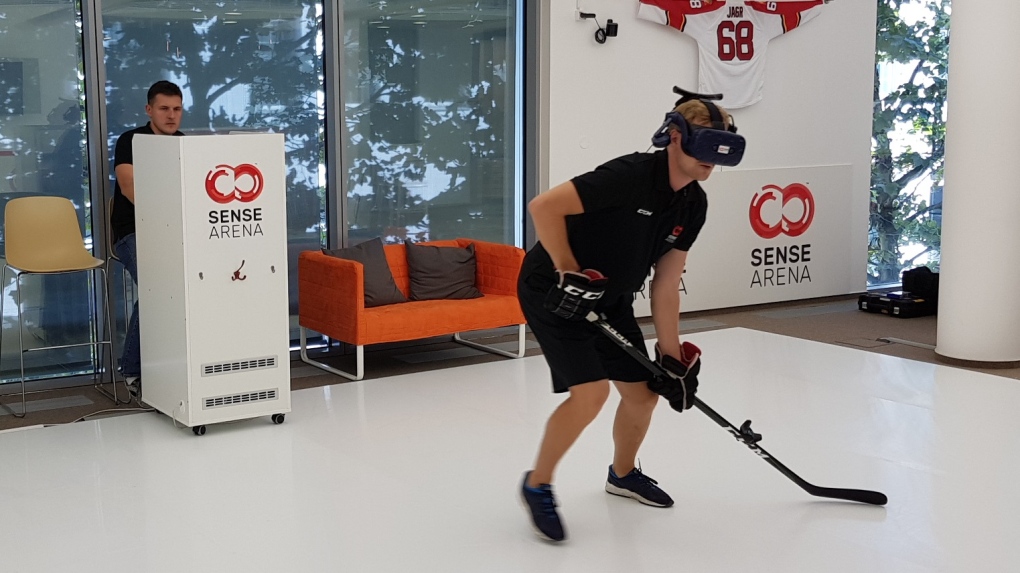 ST. THOMAS, ONT. -- Hockey purists may always prefer a frozen pond or frigid indoor rink, but our national winter sport can now be physically played in the digital world.

Sense Arena, a new hockey virtual reality simulator, has debuted in Canada. It’s designed as a training tool for players and is used by the NHL's Las Vegas Golden Knights.

Three Canadian hockey-based training businesses have acquired the technology. Two of the VR units are in the Greater Toronto Area, while the third is installed at Cosgrove Hockey Academy in St. Thomas, Ontario.

Owner of the latter, Harry Cosgrove, says Sense Arena was installed as the unique feature in his recently opened business.

“We wanted a facility that was more than your traditional hockey setting,” Cosgrove told CTV News London.

“The hockey sticks have VR sensors on them. They are placed on the blades and at the shafts. That helps the software understand what the orientation of the stick is.”

The system drills are offered at multiple skills levels. Cosgrove says they are designed to work a player’s peripheral vision and four other cognitive areas. All are designed to improve scoring, team play and agility.

But, Dennis Westaway, a minor hockey coach in nearby London, Ontario says young players are most impressed with the virtual experience at the Academy. Among them, his two sons, ages eight and 11.

“They thought that it was cool, and they loved the sights and sounds.”

Sense Arena was developed by a Boston-area company of the same name, and first debuted in Europe in 2018. It was then unveiled in North America at the Consumer Electronics Show (CES) in Las Vegas, Nevada earlier this year.

At the CES, show attendees were able to put on a VR headset, and simulate walking onto centre ice at Madison Square Garden in New York City to compete in over 80 hockey drills.

Even though Sense Arena is not suited for beginner-level players, the company states, intermediate players with basic stick handling and skating skills can benefit from the system.

Westaway believes his sons’ did. They wore their skates, even though it’s not required, as they moved from side-to-side completing drills.

Ultimately, he says the on-ice practice experience will never be replaced, but he sees some benefits from VR training.

“It offered a ‘real experience’. Having a simulation practice with other virtual players is beneficial, and it’s a benefit, as they (my sons) do not have not wear full equipment,” Westaway said.

But how real is the experience to a hockey player of any age?

“The players that use Sense Arena get better faster,” Garrison Macri, the managing director of Sense Arena, told CTV News from Massachusetts.

To back up the claim, he cites a study by Charles University in Prague, Czech Republic.

For two months, researchers tested two groups of hockey players. One group only practiced on ice, while the other worked out on ice and with Sense Arena.

But the finding of the initial study is not the end of the research, Macri maintains. He says Sense Arena is now being tested, using a similar model, by the University of Wisconsin. It involves players from both its men’s and women’s hockey teams.

However, the second study does differ in one way. Macri says it will look at a rising concern in hockey: concussions, particularly avoiding them.

Participants will always be “required to keep their heads up” while using the VR technology, Macri says.

The University of Wisconsin study results are expected in early 2020.

Currently there are 27 Sense Arena systems used in seven countries. About 1,600 players are registered to train through the system, the company states. The vast majority practice in Europe.

Still, the client most touted by the firm is the unit operated by the Golden Knights.

Marci says the club approached them after the CES. He says they are using it not only for the team’s pro players but also for supported junior teams in the Las Vegas-area.

Back in St. Thomas, Cosgrove admits having the same training device as an NHL team is a benefit to his business, but as minor hockey coach himself, Cosgrove says he’s more excited about its potential benefits for growing hockey players.

“In 30 minutes it can recreate more repetition of drills than you could in any on ice practice over a longer period of time,” he contends.