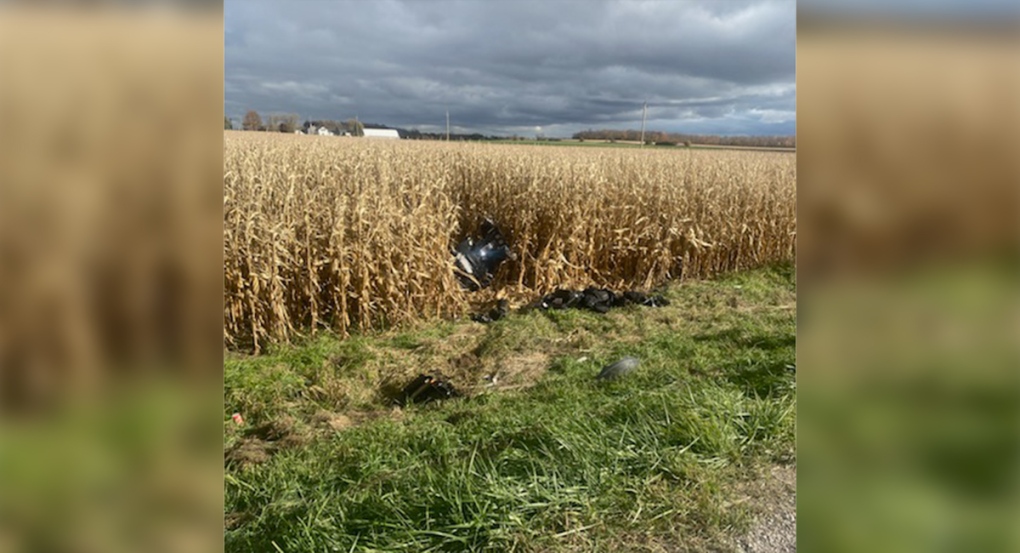 A motorcycle sits in a cornfield along Airport Line near Exeter, Ont. on Saturday, Oct. 24, 2020. (Source: OPP)

WINGHAM, ONT. -- Police are trying to figure out exactly what led to a Crediton, Ont. man suffering life-altering injuries this October near Exeter.

Huron OPP are seeking witnesses to a crash that happened Oct. 24 on Airport Line just north of Kirkton Road.

They say a motorcycle ended up crashing into a cornfield, after being forced off the road while attempting to pass a line of vehicles, when another vehicle also attempted to pass at the same time.

The 55-year-old driver of the motorcycle suffered life-altering injuries, according to the OPP, and they’d like to get some answers for the family of the injured man. A 52-year-old passenger was also injured.

Police say the road was clear, and conditions ideal at the time of the crash.

They’d like to speak to any of the drivers or passengers in the line of vehicles the motorcyslist was attempting to pass.

There was reportedly a white pickup towing two red gravity bins followed by two compact vehicles, possibly white, in the line ahead of the motorcycle.

Police say it’s possible the vehicle that sent the motorcycle into the ditch is unaware of the seriousness of the crash.