LONDON, ONT. -- Moving into phase one of Ontario's reopening plan comes at the perfect time for soccer fans.

"We've got the TV out here (on the patio) which is good," says Billy Thomson, general manager of The Scots Corner in London, Ont.

"We can't get as many people in as we'd like to because we can't get inside yet, but we're doing the best we can and everyone's enjoying themselves.”

The British pub is headquarters for many soccer fans in the city, and the patio was full Sunday morning as England took on Croatia in Euro 2020.

"This is a dream for football fans, and this is the way of getting back to the world given the circumstances of COVID and everything," says David Halfacre, an England supporter.

"The Euro tournament and patios, it's really great timing.”

Across the city at Highbury Avenue, and Oxford Street, Amjad Abdul Hamid was setting up his pop-up trailer full of soccer jerseys, flags and car decals.

"We do this every two years for the Euro and for the World Cup but having the tournament delayed by a year has been tough on business," says Abdul Hamid, who runs the trailers with his father.

"We had to pay a lot more storage because of COVID but it's good for the community to be able to enjoy this after being in lockdown for a long time." 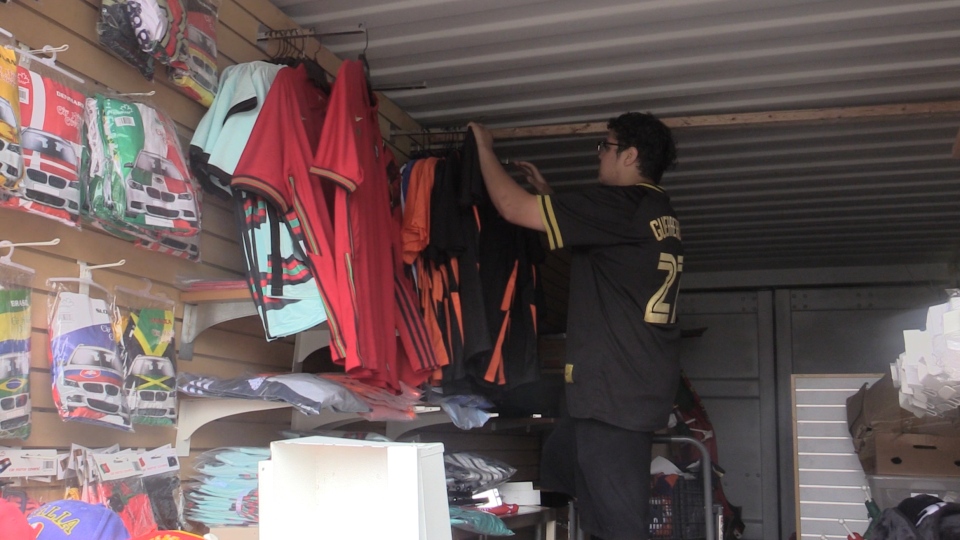 Abdul Hamid says the majority of his gear in London is sold to Portugal and Germany supporters.

"People need something to enjoy right now because there's not too much of that so this stuff helps everyone get a smile on their face,” he says.

Back at The Scots Corner, David Grassie was among a group of friends who were cheering on England on the patio.

"All of us can come out now, socialize, and that was the biggest thing because we never had a chance to get together as friends or as a family," says Grassie.

"We can watch England play, sit together and we haven't had a pint for about six months, so it's great that we can enjoy ourselves,” he says.

Grassie and the other fans went crazy when Rahim Sterling scored for the 'Three Lions' in the 57th minute to give England a 1-0 win in their opening match.

Thomson says the patio will be first come, first serve for the daily soccer matches.

"You're only allowed four to a table at the moment, but hopefully everything goes well and we get to that second phase and they bump into six people per table, which will help us out," says Thomson, who has eight tables on the Dundas Street patio.

The pub won't open for all the 9 a.m. games but they will be there Monday morning when Scotland takes on the Czech Republic.

Fans are most excited for next Friday's round two match when England faces Scotland for the first time since 2017.

"It's a big game they haven't played each other in a long time," says Thomson. "We'll be busier, it's a shame that we can't be inside and have full capacity where the place would be rockin' but we'll take what we can get and get as many people in here watching the game as we can on Friday.”