Environment and agriculture working together at demo farm

“It’s always a balance with environmental considerations and getting the most agricultural productivity. Everyone I know wants to see that balance met,” says Mari Veliz, Healthy Watersheds manager with the Ausable Bayfield Conservation Authority.

That collective goal of balancing farming and the environment has brought together farmers, conservation authorities and drainage experts to 50 acres on the edge of Clinton.

Last year, three different kinds of drainage were cut into the fields: conventional, contoured drainage (following the contours of the land) and controlled drainage, which actually has valves to control the water coming off the fields.

The goal is to see what kind of drainage works best to balance growing fantastic crops and limiting farm run-off of things like phosphorus, which can lead to problems downstream.

“We are concerned about what’s leaving our land. The only way to control that is to learn about it, and that’s what we’re doing here,” says Alan Willits, with the Huron Soil and Crop Improvement Association. 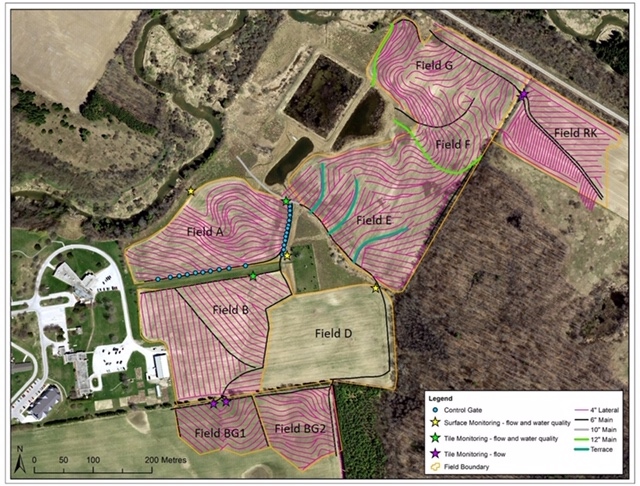 What’s ultimately learned here at the Huronview Demo Farm could impact how farmers handle their soil for centuries to come.

“We’ve had inquiries about those kinds of systems in the past, and all we could do was say, on paper, it should work. But with hard numbers, we can say these are real results we’ve seen this exact project,” says Matt Williams, of William’s Drainage near Listowel.

It may take a few more years to get any hard numbers, but with constant monitoring of tile, surface and wetland water, including flow rates and nutrient loss, what’s learned in Huron County, could coming to a farmer’s field near you.

Huron County Warden Jim Ginn says it all boils down to one thing.

“In the end, the farmer's got to make money, make a living. So how can we do that best, and protect the environment?”