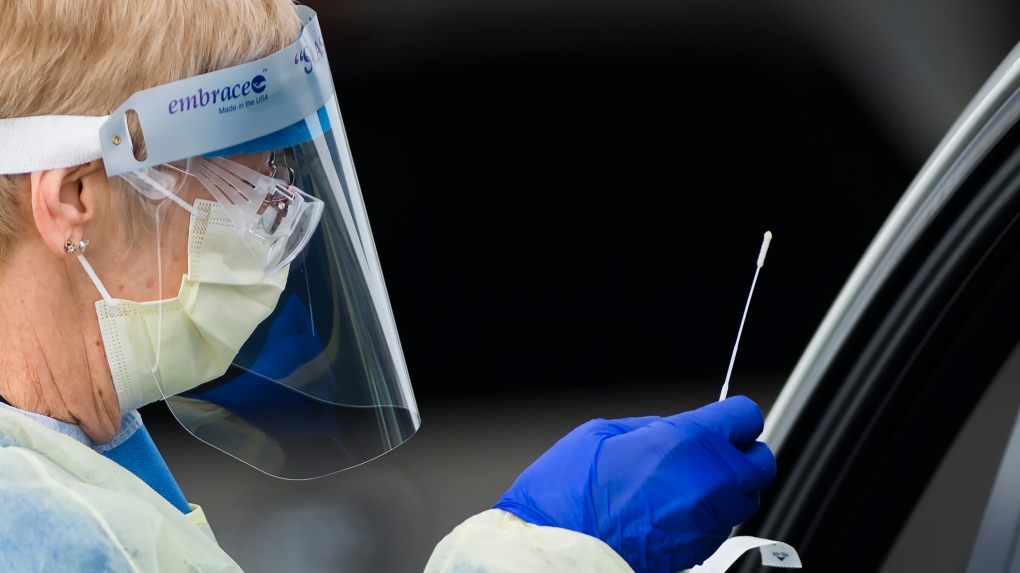 A health-care worker perfoms a test at a drive-thru COVID-19 assessment centre at the Etobicoke General Hospital in Toronto on Tuesday, April 21, 2020. THE CANADIAN PRESS/Nathan Denette

MIDDLESEX CENTRE, ONT. -- No new COVID-19 cases were reported in London-Middlesex on Tuesday, the third day in a row with no new infections.

Two more cases have been resolved, bringing that total to 517, leaving 56 active cases but no active outbreaks.

To date, the Middlesex-London Health Unit’s two assessment centres in the city have swabbed more than 27,000 people.

Despite the positive numbers, the health unit and city officials encourage residents to maintain physical distancing and wear masks when that’s not possible.

Acting Mayor Jesse Helmer says, “The success we’ve had so far didn’t happen by accident and it won’t continue by accident…The last thing we want to do at this point is declare mission accomplished prematurely.”

The trend of zero new cases continues in other area counties, where there have been no new cases since the weekend.

Here’s how the totals stand from their most recent updates:

Ontario saw another dip in the numbers, with just 112 new cases of the novel coronavirus and two deaths.

How Canadians and Americans are responding differently to wearing face masks

When a COVID-19 vaccine is ready, some Canadians likely won't want to get it

When it comes to going back to work, COVID-19 is impacting Canadian mothers more than fathers: study

Refusing a mask should be as taboo as drinking and driving, leading scientist says

Can I tuck it under my chin? Hang it from a rear-view mirror? Here's what to know about face masks

U.S. is still 'knee-deep' in the first wave of the coronavirus pandemic, Fauci says

Ontario set to extend some emergency orders until next year