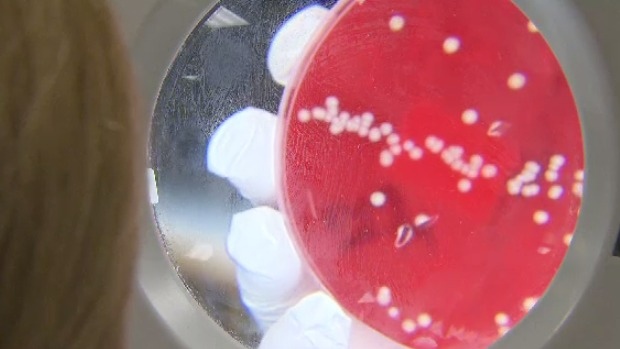 LONDON, ONT. -- The Middlesex-London Health Unit has declared a community-wide syphilis outbreak after the recent increase in the number of cases and a shift in the profile of those who may be at risk.

For only the second time since 2005, the local rate of syphilis cases exceeds the provincial rate.

When compared to the number of local cases reported in 2014, the number of syphilis cases in the Middlesex-London region so far this year has more than tripled, to 113.

“We want to emphasize that something is happening that is causing the case numbers to increase, and that syphilis transmission is occurring more easily,” says Dr. Alex Summers, Associate Medical Officer of Health with the MLHU.

“It’s important to alert the community about what’s happening. We’re seeing that cases of syphilis are becoming more widespread, and because this is a disease we’re concerned about, it’s critical to make sure people understand how to protect themselves,” adds Summers.

While the rising number of infections is a trend the Health Unit has been aware of through its surveillance, the recent escalation of that increase suggests that something different is happening.

Although health unit surveillance first detected the increase in the number of syphilis cases among the population of men who have sex with men, more recent data reveals that a growing proportion of cases are being diagnosed among people who have sex with the opposite gender and those associated with the sex trade.

To help address the outbreak, the health unit recommends that people who have new sexual partners, or multiple sexual partners, use a condom. Barrier methods, such as condoms, not only protect against syphilis, but also against chlamydia, gonorrhea and other sexually-transmitted infections (STIs) as well.

The health unit also recommends screening as a key part of the effort to tackle the spread of syphilis.

The agency is communicating directly with local healthcare providers to advise them of the situation and that they should expect calls from patients seeking to be tested. Although syphilis infections may not have any apparent outward signs or symptoms, a simple blood test can determine the presence of the disease.