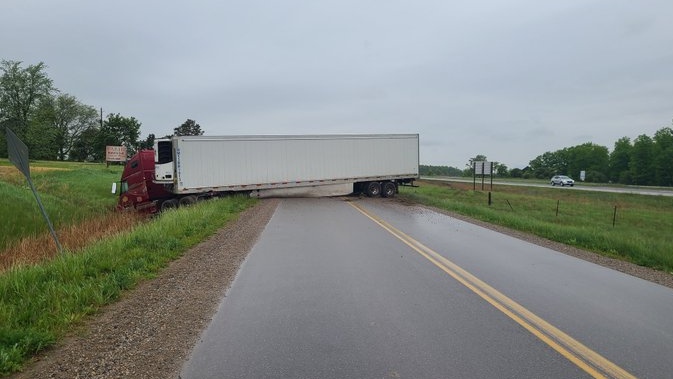 A tractor trailer is jackknifed on Westminster Drive near Colonel Talbot on Friday, May 28, 2021. (OPP)

LONDON, ONT. -- A portion of Westminster Drive near London, Ont. was closed for several hours Friday morning after a tractor-trailer jackknifed.

According to the OPP the driver of the tractor-trailer suffered minor injuries in the crash.

Emergency crews were called to the area between Colonel Talbot and Westdel Bourne shortly after 8 a.m. for a reported vehicle in the ditch.

Crews remained on scene in the area to remove the tractor-trailer. The road reopened shortly before 10 a.m.

No other injuries were reported.

#MiddlesexOPP along with @MLPS911 and @LdnOntFire on scene of transport blocking Westminster Drive @CountyMiddlesex. Please avoid the area as the road is closed b/t Col Talbot and Wetdel Bourne for removal. Injuries appear to be minor ^jh pic.twitter.com/PWfvzk8yNT