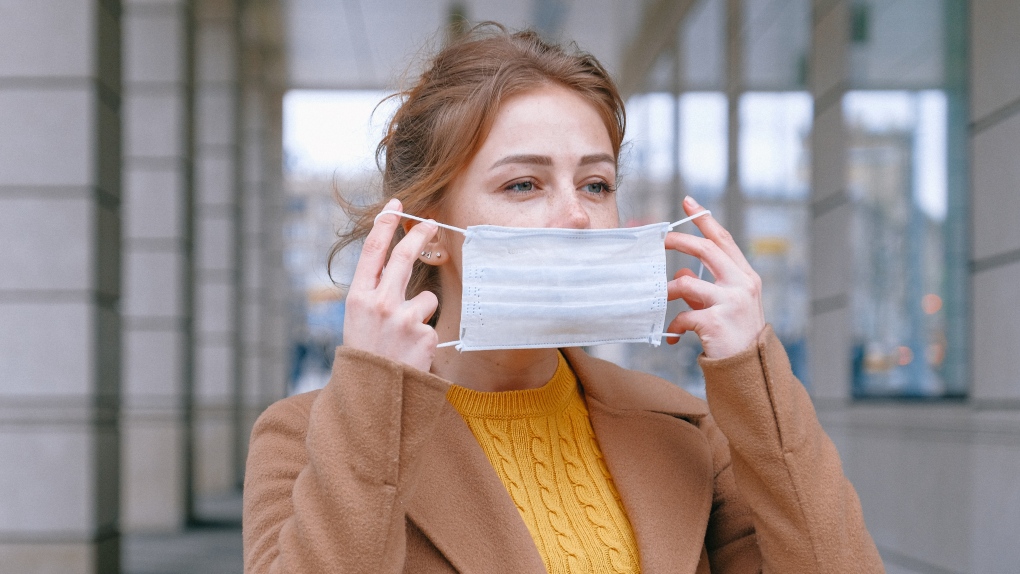 A woman puts on a face mask in this stock photo. (Anna Shvets / Pexels)

Monday's reported cases mark a drop from the weekend, when 30 cases were reported Saturday and 13 on Sunday, as well as one death.

The region last saw a a day with single-digit cases on Nov. 23, when nine cases were reported,

The Thames Valley District School Board reported a new school case late Sunday at East Carling Public School and another one Monday evening at Huron Park Secondary in Woodstock.

Across the London-area, including the London District Catholic School Board, there are active cases in 10 schools and two outbreaks – at Caradoc North Public School and Clara Brenton Public School.

In area seniors' facilities there are six active outbreaks, with the most recent declared on Saturday at Dearness Home. Only one case in a resident or staff is required before an outbreak is declared in a home.

No new cases or deaths were reported over the weekend or Monday at Caressant Care Retirement Home in Woodstock, which has seen 75 cases and two deaths, or PeopleCare Tavistock where there has been 85 cases and 10 deaths.

Here is where the cases stand in the region based on the most recent publicly available data, some regions are not reporting cases on Monday due to Family Day:

No provincial numbers were available on Monday due to the long weekend.

As of Tuesday, local public health regions will emerge from the stay-at-home order and return to the colour-coded COVID-19 response framework.

Here is where each region will be on Feb. 16:

Details about what businesses will reopen and what restrictions are in place are available here and the full provincial guidelines for levels and businesses can be found here.

Who is next in line for the COVID-19 vaccine across Canada?

Variants may have spread to two remote First Nations in Manitoba

COVID-19 shots might be tweaked if variants get worse

A rural-urban divide: Data gives most detailed look yet at where CERB went

Feds meeting with provinces to strategize on scaling up domestic vaccine capacity: LeBlanc

No new community cases found in New Zealand since lockdown

'I put my life on hold:' Disability groups plead for vaccine