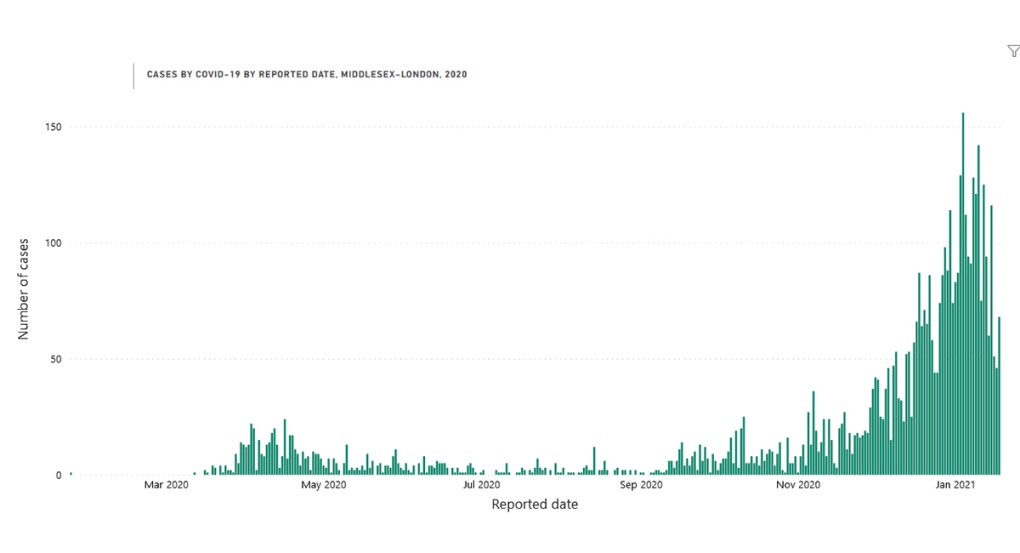 COVID-19 cases by reported date are seen in this graph from the Middlesex-London Health Unit updated Tuesday, Jan. 19, 2021.

Three of the deaths, a man and woman in their 60s and a woman in her 100s were associated with a long-term care home. The fourth was a man in his 70s.

Tuesday’s deaths bring the total just since Saturday to 17, of those 13 are associated with long-term care homes.

There are ongoing outbreaks at 14 seniors’ facilities in the region. To date, 81 deaths – more than half of the total – have been associated with long-term care and retirement homes.

At Chelsey Park Long-Term Care Home, one of the larger outbreaks, the situation appears to be improving with just 17 residents and 11 staff testing positive as of Tuesday. That’s down from a combined 67 cases on Friday. There have also been six deaths.

The facility is also undergoing an additional deep cleaning and disinfecting of the entire building, while also adding more staff to keep resources stable.

LHSC says it currently has 25 inpatients, including nine in critical care and 26 staff who are positive for COVID-19.

Southwestern Public Health is reporting new resident and staff cases at Maple Manor Nursing Home in Tillsonburg, where 83 residents and 52 staff have now been infected. There have been 17 deaths at the facility.

And at PeopleCare Tavistock there are now 40 resident and 37 staff cases as well as seven deaths.

Huron Perth Public Health is dealing with outbreaks at 10 seniors’ facilities and in one unit at Stratford General Hospital.

The most serious are at Caressant Care Nursing Home in North Perth where 40 residents and 16 staff have tested positive, and at Exeter Villa in South Huron where 36 residents and 11 staff are impacted.

An outbreak at the Goderich salt mine has also grown to include two more cases, bringing the total to five. Compass Minerals officials say several employees are also in isolation due to potential exposure.

Across the province, fewer than 2,000 new cases were reported on Tuesday, but officials say the drop is likely due to a technical issue at Toronto Public Health.

Canada isn't ready to deal with influx of those disabled from COVID-19: advocates

A new COVID-19 challenge: Mutations rise along with cases

Panel: China, WHO should have acted quicker to stop pandemic

What you need to know about the coronavirus right now