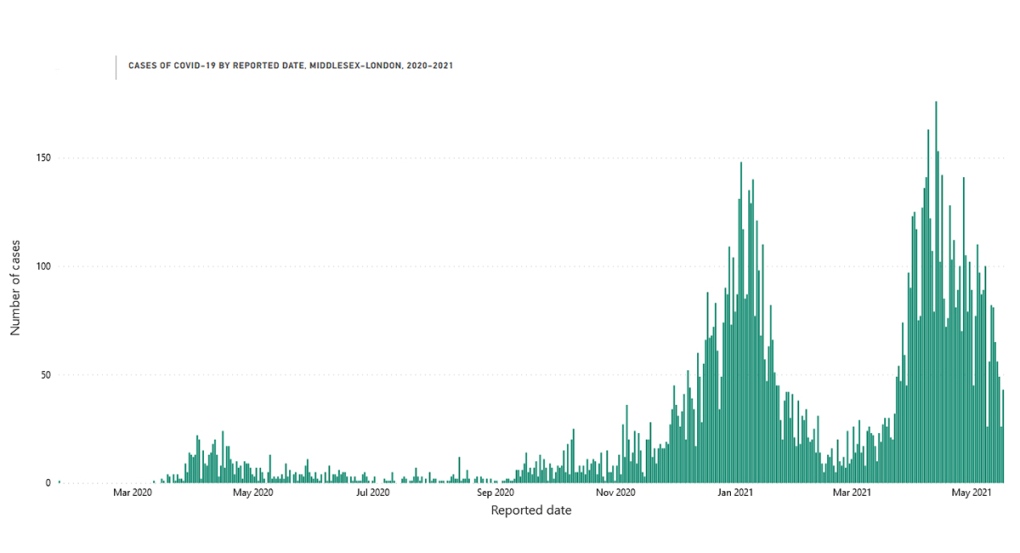 COVID-19 cases by reported date from March 2020 to May 18, 2021 are seen in this graph from the Middlesex-London Health Unit.

MIDDLESEX CENTRE, ONT. -- As vaccination bookings open up to all adults Tuesday, the Middlesex-London Health Unit (MLHU) is reporting 43 new COVID-19 cases and one death.

The new death was a man in his 70s associated with a long-term care home.

Tuesday's case total is up from just 26 on Monday, a drop believed to have been due to reporting issues in the provincial system, but in line with weekend numbers as 55 cases were reported Saturday and 47 on Sunday.

At the London Health Sciences Centre (LHSC), there are 49 inpatients with COVID-19, with 23 in intensive care. Out-of-region cases account for nine patients in acute care and 18 in the ICU.

Since it began processing tests in March 2020, it has gone from handling 50 swabs per day to now having capacity for 10,000 per day, usually turning around results in 24 hours.

As of May 15, 225,855 vaccine doses have been administered in Middlesex-London, and bookings for all adults 18 and older opened on Tuesday morning. Appointments can be booked here.

While the eligibility expansion means an additional 135,000 people in the region are now eligible, health officials say vaccine availability could mean delays.

Canadians can drive to U.S. for COVID-19 vax and avoid quarantine, Ottawa confirms

Life delayed: Why 'languishing' is a pandemic thing, and what you can do to get out of that rut

How worrying is the COVID-19 variant first seen in India?