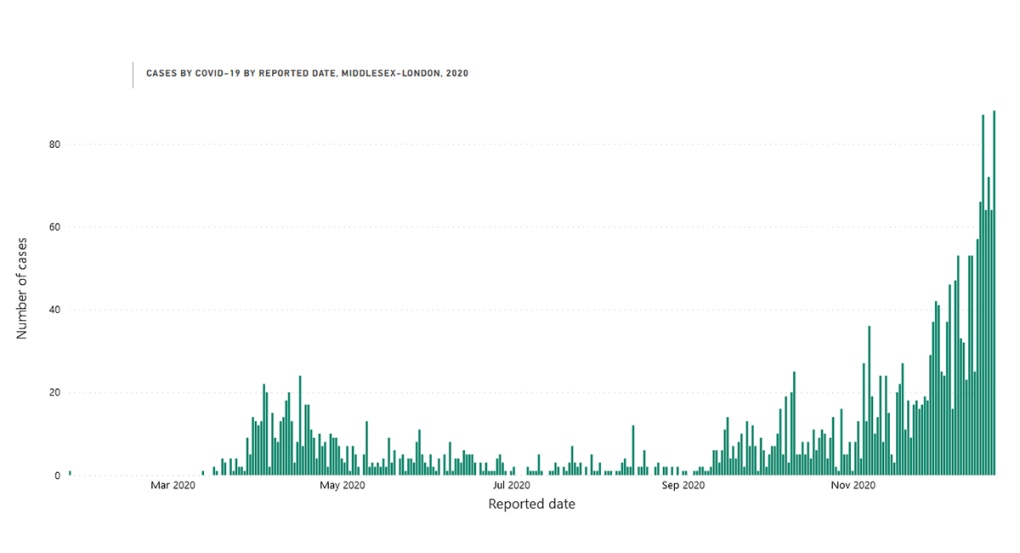 COVID-19 cases by reported date are seen in this graph from the Middlesex-London Health Unit updated Wednesday, Dec. 23, 2020.

MIDDLESEX CENTRE, ONT. -- The Middlesex-London Health Unit is reporting 88 new cases Wednesday, beating the record set on the weekend by one.

The previous record of 87 cases in one day was reported on Saturday, amid of string days that saw high case counts and deaths.

The new record comes the same day the first dose of the Pfizer BioNTech COVID-19 vaccine was administered in the region, to a worker at a local seniors’ home.

There are ongoing outbreaks at eight area seniors’ facilities, including Country Terrace Nursing Home in Komoka, where the first person inoculated works.

At University Hospital, outbreaks in eight units have been resolved, but are ongoing in four units, with 69 patients and 59 staff infected and 20 deaths reported as of Wednesday.

Victoria Hospital has two units in outbreak, with fewer than five patient or staff cases and two deaths as of Wednesday.

Meanwhile officials at Southwestern Public Health, which covers Elgin and Oxford counties, are calling for residents to limit contacts ahead of the lockdown as a new record was set there.

In a statement, Medical Officer of Health Dr. Joyce Lock said contact tracing teams are at maximum capacity, and are asking those who test positive to reach out to their close contacts to get tested.

“While the provincial shutdown officially starts on December 26, I urge everyone to limit their contact with others effective immediately. We have cases in every community and in people of every age. Transmission happens at social events, in workplaces, through travel, and within institutions. What is most worrisome is that we have many cases we cannot trace to a source. This evidence of community spread means urgent action is required from each of us.”

There are seven ongoing outbreaks at seniors’ facilities in Elgin-Oxford, with the most significant outbreaks involving 14 cases so far at PeopleCare Tavistock and 18 at Maple Manor Nursing Home.

What we know about the Moderna COVID-19 vaccine

Live map: Where Canada's COVID-19 vaccines are being distributed