GODERICH, Ont. -- The mayor of Goderich says it's time to move on two years after a tornado swept through the picturesque southwestern Ontario town.

There is no formal commemoration organized for the second anniversary of the storm that claimed one man's life.

Mayor Delbert Shewfelt says it was important to mark the day last year but now he's looking to the future.

On a Sunday afternoon in 2011, an F-3 twister tore through Goderich, crushing historic buildings and killing a veteran salt mine worker.

Residents of the Lake Huron community had 12 minutes warning before the tornado struck, but 61-year-old Normand Laberge couldn't escape in time.

Last year on the storm's anniversary, dozens of residents walked along the path of disaster that the tornado had left in its wake.

The town also organized a solemn tribute for Laberge.

This year, Shewfelt says he doesn't want to dwell on the past anymore.

"We've been through all those ceremonies, and I think it's time to look forward and move forward," he said.

The tornado was the most powerful storm to hit Ontario in years, with winds up to 300 kilometres per hour. 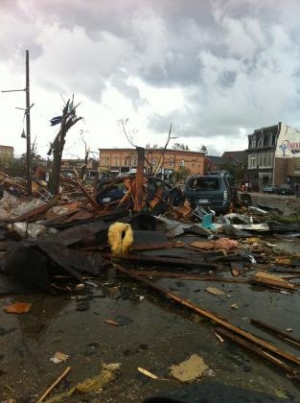 In Pictures: Damage and recovery a year after the tornado.