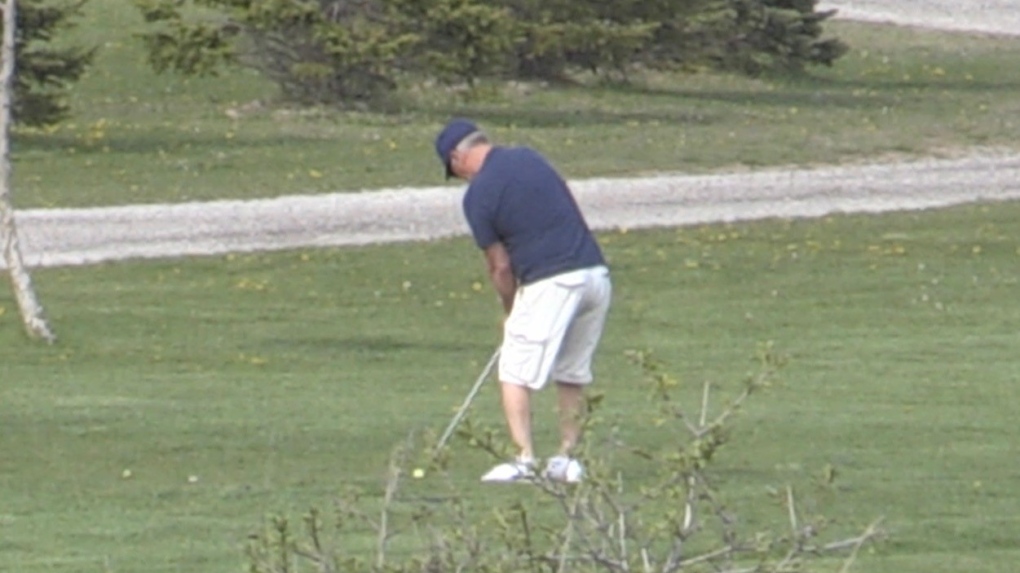 A man is seen golfing at the currently closed Fanshawe Golf Course on Sunday, May 2, 2021. (Sean Irvine / CTV London)

LONDON, ONT. -- The City of London golf courses remain closed due to provincial order, but a few rogue golfers have been spotted ignoring the rules.

Around 4:45 p.m. Sunday, CTV News London witnessed golfers playing a round at Fanshawe Golf Course, which is not currently open.

Over the weekend, reports came in of up to 20 players at a time on the course, however CTV cameras only captured three on Sunday.

The course remains closed, but there are no measures to prevent members of the public from walking on.

London Mayor Ed Holder said Monday, "Unfortunately  we can't be everywhere at all times, but we do have security on site and we are working with bylaw regarding enforcement."

Golf remains a hot-button issue locally and across Ontario as many who play the sport argue courses should have been allowed to remain open during the latest stay-at-home order.

But Holder says taking short cuts like this one will not help bring an end to the COVID-19 pandemic.

"I find this particular activity disrespectful ignorant behaviour. No one is above the law and these individuals know they are breaking the law. They are tresspassing and they are running afoul of the provincial emergency legislation. So when they are caught - and they will be - I hope they get the maximum fine to make the point."

In Tillsonburg, Ont. one golf course has openly defied the Reopening Ontario Act and remained open, resulting in charges for the owners as well as some players.

According to police at least 10 golfers were ticketed Saturday at the Bridges at Tillsonburg golf course.