Massive fire near Hensall that reduced business to rubble 'accidental'

The destruction in an industrial fire near Hensall is so great that officials say the cause may never be known, but it is not considered to be suspicious.

Bluewater Fire Chief Dave Renner says the fire is considered accidental and there is "a lot of devastation."

While an investigator with the Ontario Fire Marshal's Office was on scene Thursday, the scale of the destruction means finding a cause may be almost impossible.

The fire at Glavin Coating and Refinishing between Hensall and Zuirhc, Ont. was first reported shortly after 5 p.m. Wednesday.

The fire was discovered by a secretary after all employees had already gone home for the day.

Over 60 firefighers battled the blaze that saw flames shooting through the roof before fire crews had even arrived.

No one was injured in the fire however firefighters were not only battling flames but also frigid temperatures overnight.

They also had to return Thursday morning to deal with two hotspots.

By the time it was all over, the business, which employs 14 people, was destroyed and damage is estimated to be between $2 million and $2.5 million.

The company works weatherproofing trailers, agricultural bins and even bridges.

Renner says the family business was booming, and the Glavins told him they’d like to get up and running again as soon as possible. 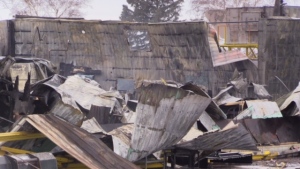