The livestock barn at Storybook Gardens was engulfed in flames and destroyed Tuesday morning.

Officials say all livestock and people are safe, but it was a dramatic scene as fire crews were called in shortly after 8 a.m.

A city animal technician reportedly discovered the fire and evacuated the building.

London Mayor Matt Brown said in a statement, "Quick action by City staff saved the animals at Storybook Gardens. I know Londoners appreciate the commitment and care for the animals displayed this morning."

The city says temporary accommodation for the 12 animals, which include goats, sheep, donkeys and chickens has been found at an area farm.

The children's amusement park is open year-round and features an outdoor skating trail in the winter. It also has farm animals available for viewing during the winter season.

However the park is closed Mondays and was not scheduled to open until 2 p.m. Tuesday.

Due to the fire though the entire park will remain closed for the day.

An investigation into the cause of the fire, which demolished the barn built in 1958, continues. 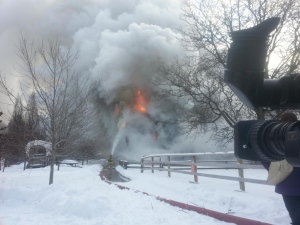