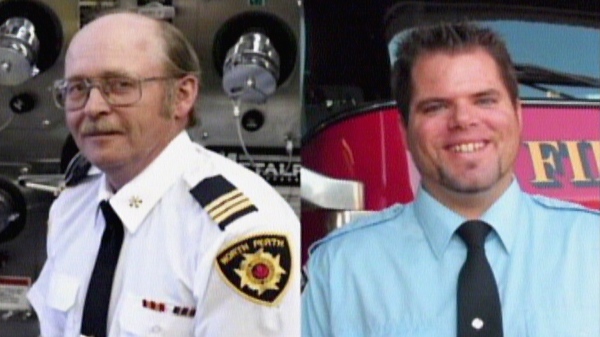 Kenneth Rea, 56, of Atwood, left, and Raymond Walter, 30, of Listowel, are seen in this undated composite image.

WINGHAM, ONT. -- It was nine years ago that two members of the North Perth Fire Department were killed while on duty.

On March 17, 2011, Ken Rea and Ray Walter were killed when they went inside a burning building on Listowel’s Main Street to see if anyone was inside.

The roof of the Dollar Store collapsed on top of them, trapping them inside.

On Tuesday, two wreaths were placed in front of the statue.

The 56-year-old Rea worked at a car dealership as his day job. He was also a deputy chief with the Atwood Hall of the North Perth Fire Department.

Walter, 30, an accountant by day, was a firefighter based out of Listowel.

A private member's bill named for the two firefighters was put forward to try to prevent similar situations from happening in the future.