It was three years ago that Goderich was making news across North America after being hit by the worst twister in Ontario in nearly 15 years.

Now, the structures in Goderich are almost 100 per cent re-built, yet for residents the wounds may never heal.

Kelly Buchanan cowered inside her restaurant, The Goderich Grill, as the tornado struck. She still fears impending bad weather now.

"If there's thunderstorms or the wind picks up, my stomach clenches and I automatically have fear, because we never thought it would happen here, but it happened here."

Sharing those kinds of stories from Goderich's tornado survivors is not something the actors and Goderich-born playwright of 'Cottage Radio' take lightly.

The play opens Thursday at the Livery Theatre. It's one of the only events marking the tornado’s anniversary.

Goderich-born playwright Taylor Graham explains "It is a story about the tornado, but it's also a story about family coming together and a community of this size and what that's like. And coming home and what that feels like, and that all has to happen when a big event like a tornado happens."

Tiana Asperjan wasn't in Goderich when the tornado struck three years ago, but she now plays the part of a Goderich tornado survivor.

"The nature of theatre I think is that sometimes it will hit people in a positive way and other times it will hurt. It's all part of just telling the real story."

Goderich's story was re-written on this day three years ago when a tornado tore a hole through the shoreline town, killing one man, injuring nearly 50 others and destroying hundreds of homes and businesses.

Mayor Deb Shewfelt says "I can remember a few days after the tornado and it was 'What are we doing, what are we going to do?' And what I said was we will build again and we will be stronger. And I think the community has proven that point."

Some work remains as re-construction of an entire block levelled by the twister is just being completed now. A new performance stage in Courthouse Square is nearing completion as well.

There will be a ceremony marking the tornado’s anniversary next Saturday as Courthouse Square is officially re-opened to the public.

It was reopened to residents shortly after the twister, but this is one small way Goderich is trying to remember what happened, while still having life return to normal. 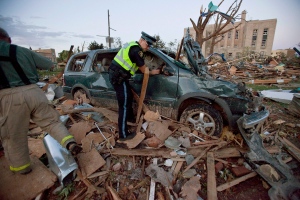 Goderich: Then and now 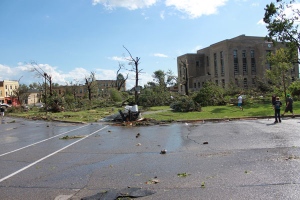