One person was taken to hospital with burns to his face and legs suffered in a fire at a farm building in Bayham Township.

Bayham Fire Department crews were called to the scene at 9305 Stewart Road just north of Straffordville around 8 a.m. Thursday.

"We received a fire call at about 10 minutes after eight of a barn on fire," said District Chief for Station 2 Perry Grant. "It had a tractor inside and some farm implements. When we arrived it was engulfed."

Grant said flames had already pushed through the roof by the time crews arrived and black smoke was billowing into the air.

He said the male victim was assessed by EMS on scene and taken to hospital.

The building that caught fire was near a larger structure that had cattle and chickens inside. There was also a family home nearby. 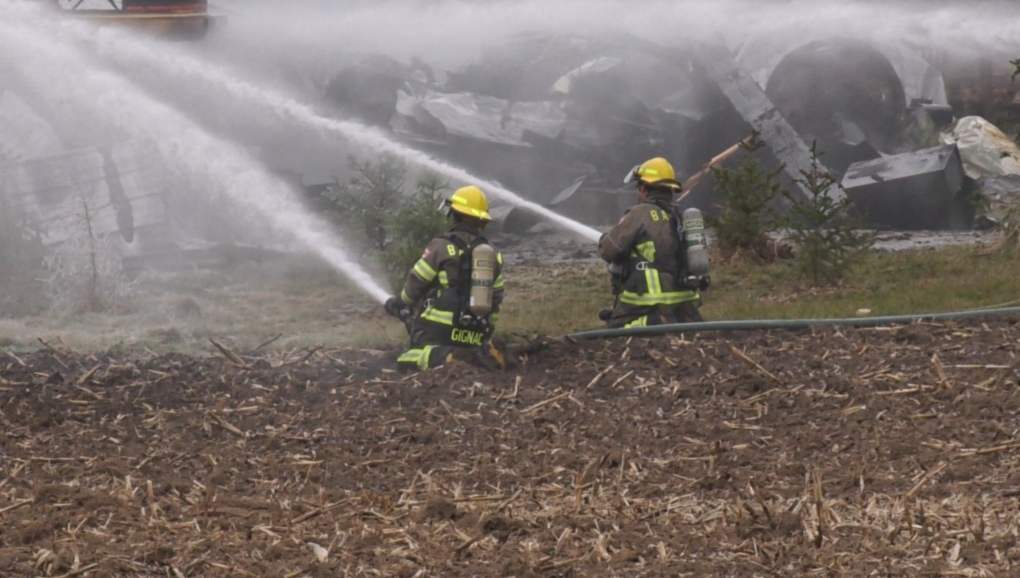 Grant told CTV News that crews were fortunate they had the wind going the right way.

"The wind direction, it was all blowing away from them," he explained, adding, they were prepared to get the animals out, "They were monitored and we were going to turn them loose if we thought it was necessary."

Once the building was knocked down by the fire, a backhoe was brought in and crews consistently turned the smouldering debris and doused it with water to avoid any flare-ups.

Water supply was the other concern, with tankers having to truck it in to the rural location.

Nearby Bayham crews assisted with water delivery, as did members of the Malahide Fire Department.

The Ontario Fire Marshal's office was contacted but Grant said, because the man's injuries aren't life-threatening and the damage was contained, they won't be attending the scene.