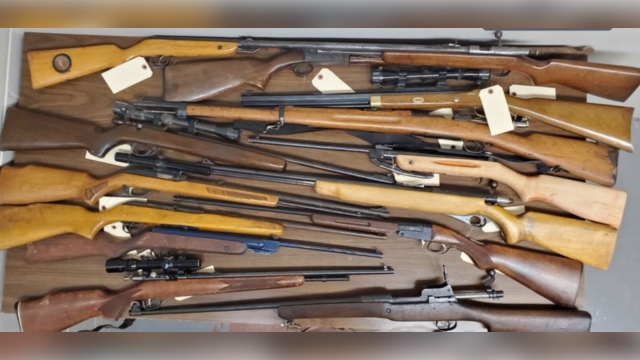 Stolen guns recovered after a hit-and-run collision in Hanover, Ont. on Wednesday, Aug. 14, 2019 are seen in this image released by West Grey police.

A 33-year-old Kitchener, Ont. man is facing 54 charges in connection with allegations of numerous theft, fraud and driving offences.

The charges come as a result of a joint investigation between West Grey and Hanover police into the alleged theft and use of stolen credit cards.

Police say the string of vehicle thefts began to connect on Tuesday, when West Grey police were called for the theft of a Ford Escape from a Concession 2 WGR residence.

The vehicle was found burned out in a nearby field later the same day. Around the same time a nearby homeower reported three metal detectors were stolen from a parked vehicle.

That evening, a Cadillac Escalade believed to have been involved in the theft was spotted by police, but fled quickly on Highway 6 toward Mount Forest, with police not chasing due to safety concerns.

A pickup was also reported stolen that night, and then spotted Wednesday morning by its owner heading toward Hanover. It fled with police again calling off the pursuit, but was involved in a collision minutes later in Hanover.

The vehicle fled, but contents of the pickup were left behind, including a metal gun safe with 12 rifles and a shotgun previously stolen during a Varney-area break-in.

The man, who had been described to police by crash witnesses was later spotted on foot and arrested without incident.

He is now facing dozens of charges including multiple counts of; possession of stolen firearms, illegal use of a credit card, possession of property obtained by crime both over and under $5,000, motor vehicle theft, flight from a each officer and dangerous operation of a motor vehicle, among others.