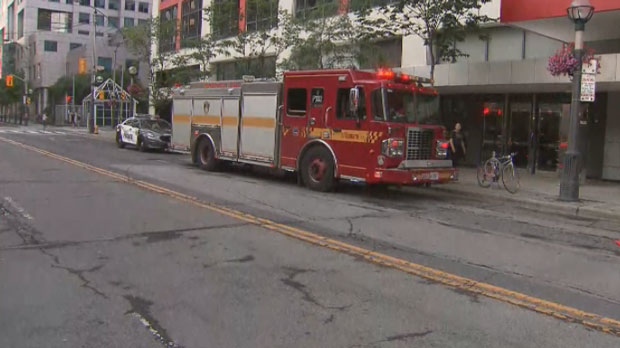 Emergency crews respond to reports of a man falling into the elevator shaft of a building near John and Front streets on July 13, 2019.

Police and the Ministry of Labour are investigating the death of a man who fell down an elevator shaft at the CBC building in Toronto.

Police Const. David Hopkinson says witnesses reported seeing the man swing from the elevator cables before falling to his death on Saturday evening.

Toronto district fire chief Stephan Powell said firefighters were called to the scene at about 6 p.m. and found the man on top of the elevator car, which was on the first floor.

They were able to get the man off of the car, but he died of his injuries.

No details were given on the identity of the man.

In a written statement, a CBC spokeswoman said that there was an accident in the Toronto Broadcast Centre on Saturday and that the public broadcaster is in contact with both the authorities and the property management company.