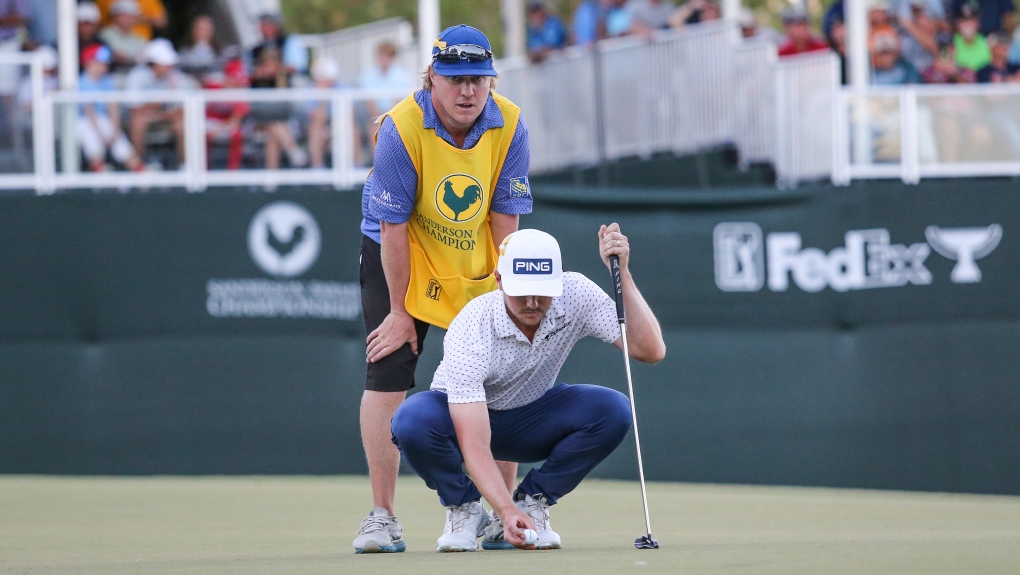 Mackenzie Hughes, of Canada, lines up his putt on the 18th green with his caddie Jace Walker behind him, in a second hole playoff during the final round of the Sanderson Farms Championship golf tournament in Jackson, Miss., Sunday, Oct. 2, 2022. (James Pugh/impact601.com via AP)

Jace Walker was unusually calm heading into the final round of the Sanderson Farms Championship.

The caddie from St. Thomas, Ont. was on the bag for Mackenzie Hughes, who held a share of the lead going into the final round of the PGA Tour event in Jackson, Miss.

“We’ve been in the final group a couple of times, and it didn't go our way,” says Walker, who was about to board a flight back to Arizona for a week off.

“Most notably the US Open when he [Hughes] was in the final group. This time he was calm all day, and I think he just had this kind of overwhelming sense of confidence that he was going to get it done, so it was a lot of fun,” he adds.

Hughes had to make six key putts on the final seven holes — four of them for par — to outlast Sepp Straka on the second playoff hole.

It was the second career PGA Tour victory for the 31-year-old from Dundas, Ont. and first with Walker carrying the bag.

“He is just so tough,” says Walker. “Some of those pars he made on a back nine and just the ability to kind of hang in there and make those important pars or par saving chips is so tough.”

The win was the first on tour for Walker who has been caddying for nearly a decade. He was a great local amateur player, and tried the professional circuit, playing some events on the Mackenzie Tour in Canada before turning to caddying.

“You're kind of in there like a coach would be on a hockey team,” says Walker. “It kind of made all the years of caddying and grinding playing golf kind of worth it. You put in all those hours and all the work in this game and sometimes it pays you back.”

Walker became the second St. Thomas native to win as a caddie on the PGA Tour.

Brennan Little has won two major championships on the bag for Mike Weir (2003 Masters) and Gary Woodland (2019 US Open). They both were members at St. Thomas Golf and Country Club and it was Little who suggested Walker give up playing and become a caddie.

He adds, “I messaged Butch [Little’s nickname] and gave him a quick thanks last night for getting me into this. He’s helped me over the years, and I still lean on him here and there. He told me ahead of Sunday to be decisive, and not waver on any decisions. He told me to have the answer ready quick and confidently, so that was a good tip.”

Hughes’ victory moves into top spot in the FedEx Cup standings, and gives him a two-year exemption on the tour and a place in all major tournaments next season.

Caddie’s typically take home ten per cent of a player’s earnings for a victory. Hughes took home the first place cheque of $1.422 million for the win.