LTC's cash to fill budget shortfall could run out in June

LONDON, ONT. -- As the COVID-19 pandemic continues to take a deep bite out of bus fare revenue, the London Transit Commission (LTC) could run out of money to cover its monthly budget shortfalls in June.

That has remaining riders worried that further service cuts are coming.

“It’s very important for me,” says Gerri Jacques at a downtown stop. “I take three buses to work every morning, and then three buses home, cause I live on Wonderland and work on Oxford.”

A new LTC report explains that ridership has dropped to just 20 per cent of typical levels on city buses.

Administration recommends having riders continue to board through the rear doors and not pay fares until May 31. The physical distancing practice costs $1.7 to $3 million each month in lost fare revenue.

The LTC can temporarily cover its budget shortfall by redirecting money received from tax assessment growth, and depleting a pair of reserve funds.

But that money will run out in June.

“The end of May, which is the next period we have mapped out, we aren’t going to be able to continue on as we are, without doing things differently,” explains LTC Chair Phil Squire.

As an essential service, Councillor Squire says buses will keep running, but further schedule or route reductions will have to be considered.

LTC administration also recommends delaying the start of a public transit service to industrial areas. Modified service to Innovation Park would be pushed to 2021.

Squire adds that the LTC shouldn’t bank on a bailout from the federal or provincial governments.

“That’s a possibility, but I think to be responsible we have to look at our own house at LTC.“

The London Transit Commission will discuss the financial crisis caused by COVID-19 at its meeting on Wednesday. 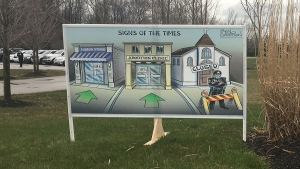