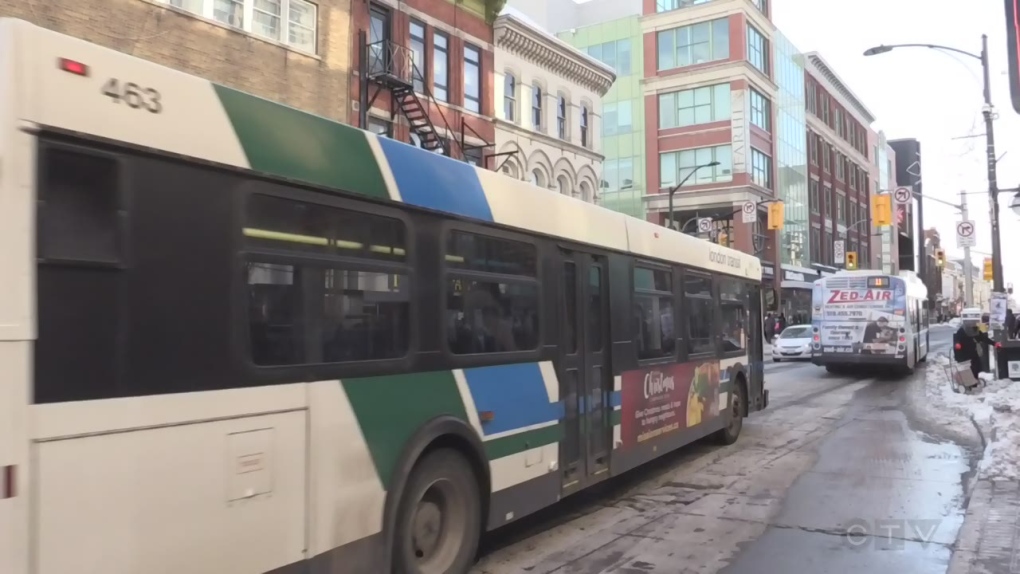 An LTC bus passes through downtown London, in this file photo. (CTV London)

An analysis by the Canadian Urban Transit Research and Innovation Consortium (CUTRIC) has determined that London’s goal to electrify its bus fleet may be feasible, but is complicated by technological requirements and substantial upfront costs.

“I think it’s still going to happen, but it’s going to be a longer road,” explains Councillor Phil Squire, Chair of the London Transit Commission. “I don’t think anyone should be expecting it in the next year, or five, that we’re going to see an electric bus fleet.”

The analysis determined that a combination of overnight charging in a depot, and topping-up the batteries at ‘opportunity charging’ stations along the route, would be necessary.

But about half of the heavy-duty routes, with the most stops and largest passenger loads, could not be successful during rush hour with current technology.

Kelly Paleczny, General Manager of London Transit says a gradual rollout of battery-powered buses would start with routes that would require the least energy.

“Put some chargers in the Wonderland Depot, and start with some of the routes we know would be successful. We would then wait for technology to improve such that we can continue to build on that,” explains Paleczny.

In January during his State of the City Address, Mayor Ed Holder said it was his goal to make London the first major city in Canada to have a zero emission public transit bus fleet.

“We’ve sort of done this in reverse,” says Squire. “We heard an announcement that created a lot of fanfare and optimism, but now the reality sets in. We need money, we need the technology.”

The next step, pending approval by the London Transit Commission, is to develop a detailed electric bus implementation plan.

“It’s about the plan moving forward, it’s about the costs associated with that, the entire financial picture.” says Paleczny.

The G.M at London Transit says that implementation plan could be completed next summer.

If funding is available, purchasing the first electric buses for a pilot project on low-energy demand routes would take an additional year.

“So I’d say that two (years) is reasonable, when we could see (electric) buses on the road."