VAUGHAN, Ont. -- In a massive co-ordinated investigation against online child exploitation, Ontario Provincial Police have charged 60 people and say they will continue working to put predators out of business.

As of Thursday morning, police said, 99 search warrants had been executed across Ontario, resulting in 249 charges against the 60 suspects, who live in rural and urban communities throughout the province.

"The sweep carried out over the past few days is another wake-up call to those who commit these monstrous crimes against children," Chief Supt. Don Bell told a news conference.

Most of the suspects are not known to one another, Bell said.

The raids also led to the rescue of 14 child victims and the seizure of drugs and some weapons, which police said were not gang-related.

It's anticipated more arrests will be made and more victims identified as the investigation continues.

Among those charged are three people under age 18, who cannot be identified under provisions of the Youth Criminal Justice Act. Others charged range in age from 19 to 63.

"It is one of the most difficult jobs in police work you can imagine," said Insp. Scott Naylor, referring to the thousands of "horrific images" officers had to view during their investigation.

In announcing the crackdown Thursday, police praised the Provincial Strategy to Protect Children from Sexual Abuse and Exploitation on the Internet.

Since the launch of the initiative in 2006, the provincial force has completed nearly 23,600 investigations and laid 8,750 charges against more than 2,600 people.

More than 500 child victims have been rescued in Ontario since the program began, police said.

At Thursday's news conference, police displayed an animated map depicting more than 7,000 individual Internet Protocol addresses over a period of 180 days that had been identified as download candidates for suspected child pornography.

"The Provincial Strategy demonstrates the success that police services can achieve when working together and sharing our best practices and information," said Bell. 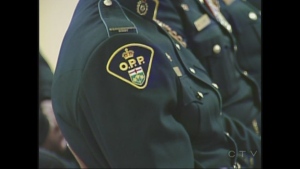