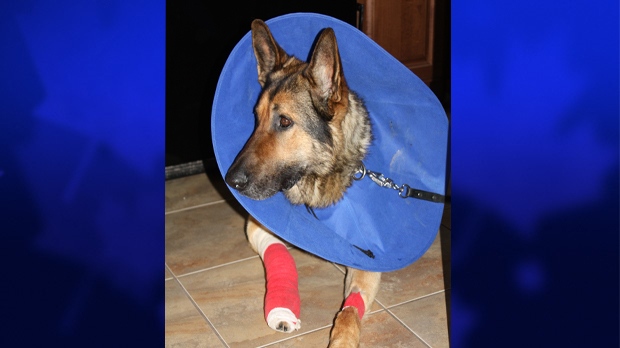 A London Police Service dog is recovering from surgery after sustaining an injury during a pursuit of a wanted suspect.

Bosco and his handler were tracking a suspect wanted by St. Thomas police on Thursday around 2 a.m.

The pair tracked the suspect to the area of Brydges Street and Egerton Street, when Bosco cut his paw on scrap metal, suffering a punctured artery.

After undergoing emergency surgery, Bosco is out of the hospital and is expected to make a full recovery.

A separate K9 officer, PSD Trax, continued the search for the suspect and was able to locate him within a nearby residence.

The suspect, who was wanted for breach of probation, had initially been spotted shortly before 11 p.m. on Wednesday in a vehicle, but a pursuit by St. Thomas police had to be terminated due to public safety concerns.

James Boyd, 31, of St. Thomas has since been charged by London police with assaulting police, resisting arrest.

He is also facing facing five counts of breach of probation, breach of recognizance (party to the offence), three counts of disqualified driving, flight from police and dangerous driving in connection with his encounter with St. Thomas police.

A female passenger who had been in the vehicle with Boyd and was known to police was later arrested and charged with failing to comply with undertaking, breach probation (party to the offence) and permitting motor vehicle to operate without insurance.

Both were being held for a bail hearing.