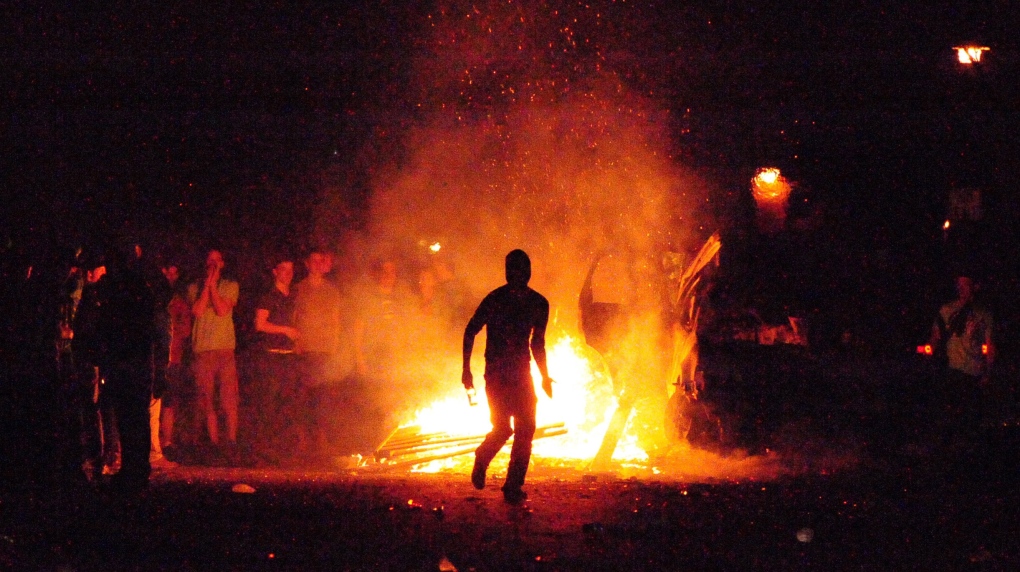 A lone rioter stands is silhouetted by a fire as he prepares to throw a glass bottle at police during a riot on London, Ont., early Sunday, March 18, 2012. (London Community News, Mike Maloney)

LONDON, Ont. -- The police chief in London, Ont., isn't mincing words ahead of what is likely to be one of the busiest party weekends of the year.

Nearly a year ago, London's Fleming Drive was transformed into a virtual war zone as out of control St. Patrick's Day revellers pelted police with bottles, and torched a news vehicle.

Once the dust settled, police had arrested 68 people -- including 26 students from Fanshawe College - and laid a total of 175 criminal charges.

Chief Brad Duncan says there will be zero tolerance for any activity that even remotely begins to look like St. Patrick's Day last year.

There will be a beefed up police presence downtown, in the Fanshawe College-Fleming Drive area, and around Western campus.

"We certainly have additional staff in place and we also have contingency plans," said Duncan.

One bash has already caught the attention of London police -- an event dubbed St. Party's Day is scheduled to take place all day Sunday in a downtown parking lot.

The event will feature live music, games, lots of green beer, and more than 3,000 people are expected to attend.

"We're very much aware that this party is being advertised, so we're looking at it and speaking with persons responsible," Duncan said.

Police are also hoping new powers outlined in a reworked nuisance bylaw, approved by city council last year, will help ensure there isn't a repeat of the Fleming Drive incident.

The bylaw gives officers the power to break up parties on private property with permission from the police chief or senior officer on duty.