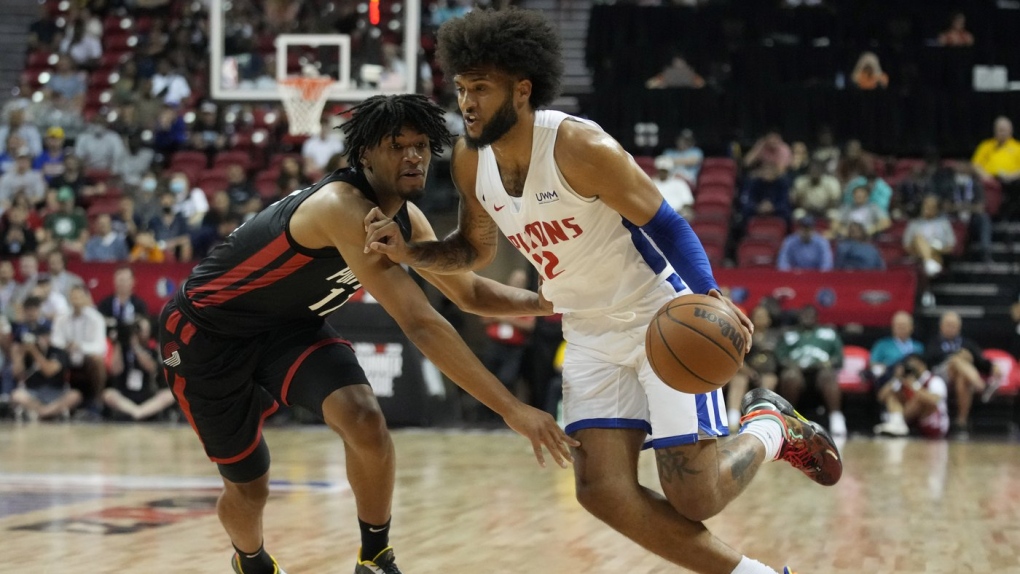 Shaedon Sharpe’s rise to being one of the more intriguing rookies to look out for in the NBA has been meteoric.

The London, Ont., native who was drafted seventh overall by the Portland Trail Blazers in the 2022 draft, had received his first NCAA Division I offer less than two years ago.

“It happened really fast. Happened really quick. But I mean, every day I just push myself to be the best version of myself, (the) best basketball player and teammate (I could be),” the 19-year-old said. “Just stay humble (and) get into the gym and work out every day.”

After being the top-ranked high school player in the 2022 class, he reclassified and finished school early, then enrolling at the University of Kentucky in January. The initial plan was to sit and then play the 2022-2023 season for a Wildcats program that has long produced first-round NBA draft picks.

That plan changed when head coach John Calipari approached Sharpe about his prospects in this year’s draft.

“Being at Kentucky, my whole mindset was just (to) get ready for this season, get my body right and everything. But then coach Cal came to me and he said I could potentially be a top-10 draft pick,” Sharpe said.

“When he told me that, I looked into everything — I talked to my coaches back home, I talked to my family about it and then that's when we made the decision that I'm going to keep my name in this year's draft and just pursue the NBA.”

Although an easy decision for others, Sharpe’s situation did not make the choice easy.

“I'm not going to sit here and say it was an easy decision. It was hard,” he said. “But when I went to the combine and got the info from numerous teams that I'm a (projected) top ten draft pick, that's when it became easier to make the decision and just keep my name in this year's draft.”

Not playing a single minute of college basketball has made Sharpe widely considered the mystery man of this year’s rookie class.

The last stretch of competitive basketball he had played was the Nike EYBL circuit where he competed for UPLAY Canada in the summer of 2021. In 12 games of action, the six-foot-six guard was electric averaging 22.6 points, 5.8 rebounds, 2.7 assists while shooting 36.4 per cent from three-point range.

The sparse amount of tape was not a concern for new Blazers general manager Joe Cronin.

“When you have a player with his level of talent, he also has a potentially high ceiling. Getting him in our gym with our coaches is something we are excited about,” Cronin said in an email to The Canadian Press.

“Shaedon is extremely talented and has great feel for the game. He has great work ethic and things will fall into place for him in time.”

Sharpe does not lack for confidence in his ability either, having said in June that he sees himself "being one of the greatest players to ever play the game of basketball," according to James Boyd of the Indianapolis Star and that he aims to win rookie of the year.

“Working out on my game builds confidence because I know I can hit a shot, get teammates involved and play both sides of ball. That's where the confidence comes from, just working out and staying in the gym,” he said. “But I feel like being a basketball player if you don't got confidence, you can't really play the games. I feel like you need confidence to be the best version of yourself (and) just have fun with it.

“I feel like I can have a big impact, play both sides of ball. Starting with defence and then transition into offence, just get my teammates involved score, and just really defend and lockdown players.”

Sharpe will now have the opportunity to develop and learn in Portland — especially from the likes of all-NBA guard Damian Lillard and head coach Chauncey Billups, a former 17-year NBA vet and point guard of the 2004 champion Detroit Pistons.

With training camp underway, Sharpe plans to soak in all he can.

“It excites me a lot because they've been in this league, what, 10-plus years? Dame 10 years. They really know the game, know how it works,” Sharpe said.

“For me, just trying to pick their brains, ask as much questions I can, and really just learn from them. It really excites me knowing that I’m going to be playing with these guys, going against them in practice and everything. I feel like I could really bring my game to the next level on this team.”

Once a dream to be on this stage for the athletic guard who made his way from H.B. Beal Secondary in London to Sunrise Christian Academy in Wichita, Kansas, then Dream City Christian School in Glendale, Arizona, Sharpe will now get the chance to be a part of a growing list of impactful Canadian players in the NBA.

This report by The Canadian Press was first published Sept. 23, 2022.

Just days after introducing her first bill as Alberta’s premier, Danielle Smith says she is prepared to make changes after widespread criticism that the legislation grants unchecked power.

Hundreds of people gathered on Sunday night to honour four Indigenous women believed to have been murdered by an alleged serial killer.

Better protections and options for consumers are just some of the ways Ottawa can help address food unaffordability in Canada, the lead author behind a new price report says, as average grocery bills are expected to rise in the new year.

Ontario education support workers have voted to accept a new deal with the provincial government, putting an end to a long and contentious negotiation process.

The Canadian government appears on the verge of bringing home some 40 Canadian women and children held under terrible conditions in a Syrian detention camp.