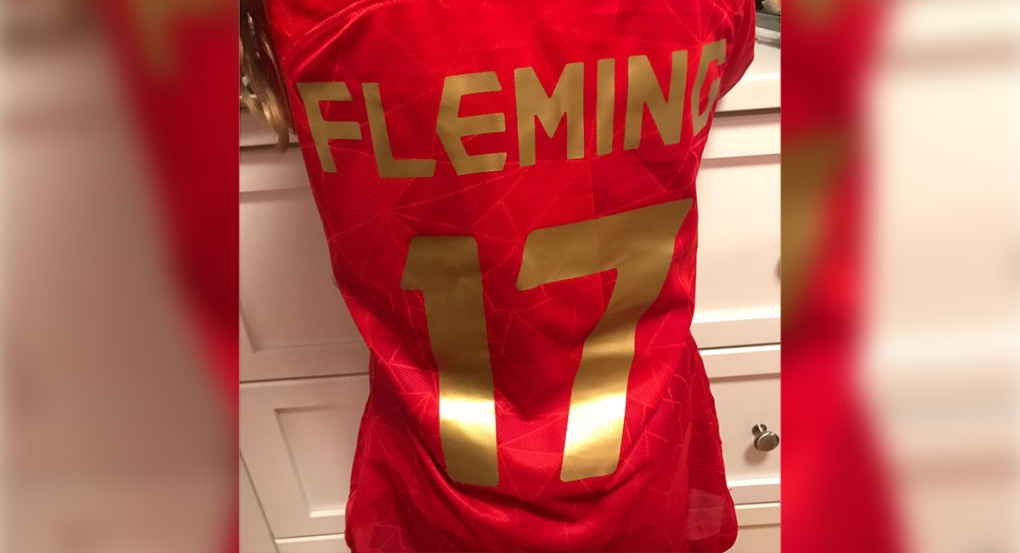 After the game, Nigel Wallis and his daughter, nine-year-old Logan -- who was wearing a replica of Fleming's number 17 jersey -- were at the sidelines waving a Canadian flag.

Wallis tweeted that's when Fleming, "ran all the way across the field to the dugout, and all the way back to ask whether our daughter wanted her jersey. So incredibly kind."

Canada's national team had just concluded a match against New Zealand (which they won 5-1) as part of their Gold Medal Celebration Tour.

And after Fleming said it was nice to meet her, Wallis says, "Our kid was sort of awestruck in muteness…"

Wallis tweeted that his daughter slept in the jersey all night.

He says it was "just really sweet of a pro athlete to notice a kid [among] the fans and then to take the time and energy from all the things she has to do post-match (cool down stretching, rehydrate, grab dry clothes, etc.) to make our daughter’s day/week/month. It was very kind of her."

And he encourages everyone to head out and catch a game as part of the team's tour and support the growth of women's soccer.

"The team is awesome, games are super fun, and they’ll have a great time celebrating the historic gold while supporting the team for the future."

Just want to thank #canWNT’s Jessie Fleming. After yesterday’s game, she saw our kid waving a Cdn flag in a replica #17 jersey - and ran all the way across the field to the dugout, and all the way back to ask whether our daughter wanted her jersey. So incredibly kind @CANWNT 1/2 pic.twitter.com/Y4r86sQ8Bi

Also? Amazing game & the level of athleticism, speed, velocity is so much more present in person than when flattened by TV - go attend the #CANWNTGold tour. They’re amazing and you’ll have a great time 3/2