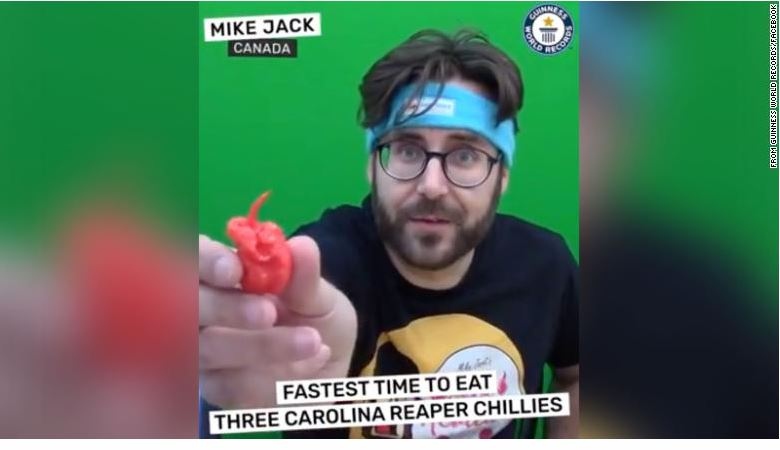 How fast could you eat a hot pepper? What about three of the world's hottest peppers?

Mike Jack of London, Ont. ate three Carolina Reaper chili peppers is 9.72 seconds, setting the Guinness World for fastest time to eat three of those peppers, which Guinness says are the world's hottest.

The video of Jack achieving the goal was posted on the Guinness Book of World Records Facebook page on Wednesday, but the official date of the record was November 21, 2020.

The average jalapeño pepper scores between 2,500 to 8,000 SHU, according to Guinness.

Jack is familiar with world records because he has previously set three of them, all for consuming hot peppers, according to Guinness.

He broke his first record in January 2019, when he achieved the fastest time to eat three Bhut Jolokia chili peppers. He downed the hot pepper in 9.75 seconds.

His second record is for the most Bhut Jolokia chili peppers eaten in one minute, which he achieved on March 2, 2019, by eating 97 grams.

He followed that when he broke the record for most Bhut Jolokia chili peppers eaten in two minutes on February 29, 2020.

The Bhut Jolokia chili registers at slightly more than 800,000 SHU, strong enough for the Indian military to use it as an ingredient in a hand grenade used for immobilizing adversaries, according to Guinness.