LONDON, ONT. -- He touched thousands of lives with his kindness and generosity, and Walter Gretzky is being remembered as everybody's hockey dad.

Those who met him describe him as someone who had time for everyone.

Ryan Spence met his son, hockey great Wayne Gretzky as a child, and then his father as an adult.

"Everyone that has met Walter Gretzky once has a classy story to tell. The amount of times that he would spend with kids, with adults. As long as was needed he was there to sign autographs to tell stories and to asks questions."

Spence once showed up, as many others did, at the Gretzky home in Brantford, Ont. unannounced and knocked.

Walter welcomed him in.

"It was a Sunday, early afternoon and there was a car in the laneway so we knocked on the door and there you go you're at the shrine of hockey and you just think of all of the memories that are there in the basement at Walter Gretzky's home."

Tom McInerney helped organize a golf tournament fundraiser for Parkinson’s a few years ago with Walter as the special guest for the event.

"To be honest I said, 'In fact I still have space in my foursome, so I know where he's going to play.'”

McInerney added, “When he sat down on the golf cart in the morning I turned to him and I said, 'You know Walter, a lot of people are going to (want to) get your autograph and take your picture and I hope that's okay?'"

He says Walter embraced the occasion, “’He looked at me and said, ‘Tom, three times so far in my life I've been told I wouldn't make it through the night, so every day is a blessing, let's just go have fun.'"

With thousands of tributes pouring in from across Canada it seems that the man who raised the 'Great One' was a great one himself. 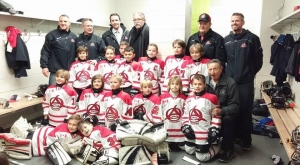