What began with a little girl’s letter lost in the snow, has turned into a Christmas story to remember.

Eight-year-old Ruby Boulter, just like many children her age, wrote a letter to Santa Claus two weeks ago.

But where this letter has travelled and the seasonal magic it has spawned, is sure to put you in a festive mood.

The story starts two weeks ago on Wilson Avenue near Labatt Park. It was moments before London’s annual Santa Claus parade. Ruby and her friend had their Santa letters in hand, according to Ruby’s mother, Krista Hawthorn.

“They went running, and as we got to Dundas Street Ruby panicked because she could not find her letter for Santa.”

As they walked home, Ruby and her Mom looked for the letter, but could not find it.

A distraught Ruby feared Santa would never see her list.

But on Sunday afternoon, a stranger appeared at the door of the family’s home. 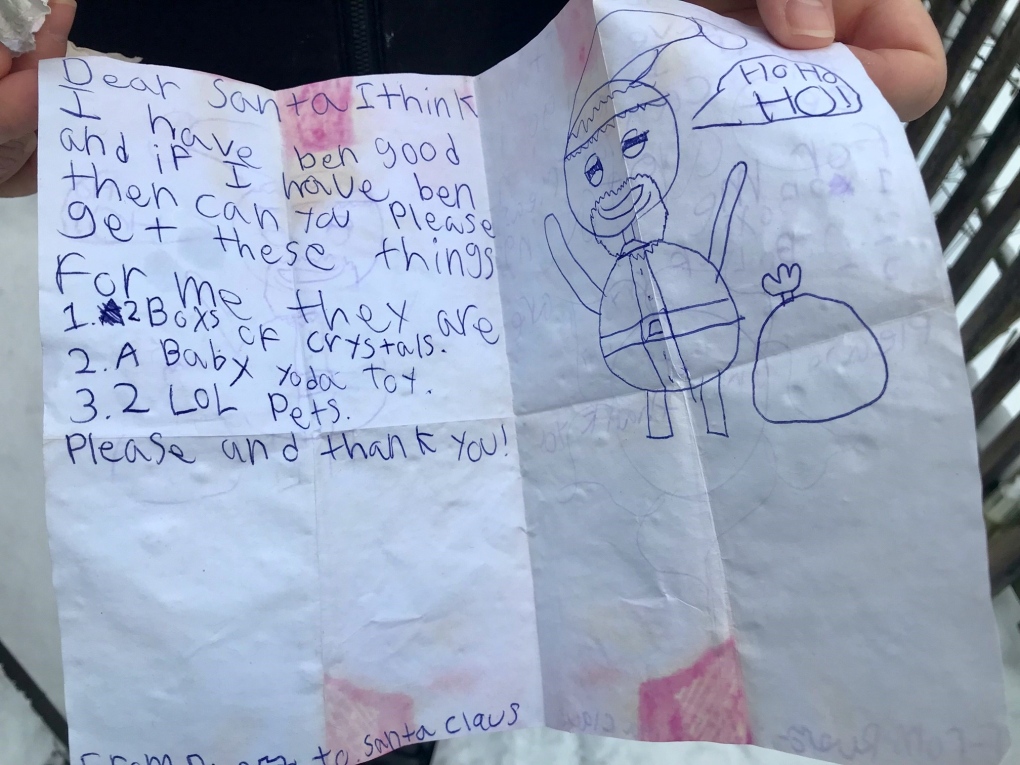 Ruby Boulter's letter to Santa that was lost in the snow and returned to her two weeks later, Nov. 29, 2021. (Sean Irvine / CTV News)

A sibling answered and Krista soon followed. She found a woman in the doorway saying, "‘I found this letter in the snow.’ She pulled it out and it was water-logged and tattered.”

You guessed it, it was Ruby’s letter. But the woman had more to say -- and it would leave Krista in shock.

Krista told the story to the family’s older children Sunday. However, she waited to tell Ruby the news until Monday.

She asked her daughter, “Do you remember losing this?”

And Ruby's face turned to wonder at the sight of her lost card.

But that’s not all the woman had for Ruby. You see, Santa’s latest helper had also read Ruby’s wish list, and decided to help him out.

In the end, if Ruby’s face doesn’t say it all, her words do. “That person must be very nice.”

And as Krista says, acts of kindness cannot go unrecognized.

“We’re just all so warm right now, and just know that the Christmas spirit is alive and well.”

And Ruby and Krista hope to do just that if Santa’s new helper sees this story.

Ruby says she'd just like to say, 'Thank you so much," if they ever met.

UPDATE: The family reached out to CTV News London to say they have now been in contact with the woman who brought the gifts, and she wishes to remain anonymous.