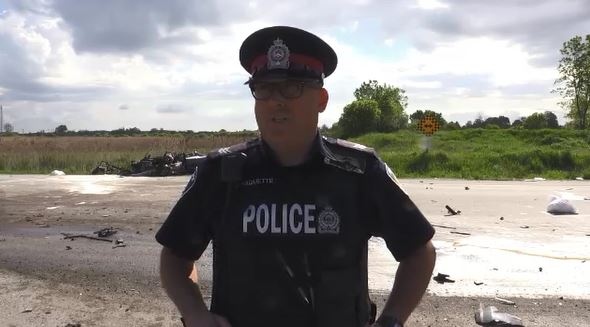 A London police sergeant has pleaded guilty to a trio of Police Services Act charges.

As a result, the London Police Services Board has chosen to suspend Sgt. Peter Paquette without pay for 25 days and he must submit to mandated training.

The plea followed an incident involving a woman inside police headquarters two years ago.

The woman had been arrested for being intoxicated in public, assaulting an officer, resisting arrest and property damage on Sept. 6th, 2016.

She then refused to identify herself or answer Paquette’s questions, becoming agitated and banging her head against the wall.

She was restrained to prevent injury, which resulted in a further struggle with officers, at which point Paquette kicked the woman several times.

She suffered bruising as a result of the altercation.

The incident saw Paquette plead guilty to two counts of discreditable conduct and one count of using unnecessary force under the Police Services Act.

Official documents indicate there were "mitigating medical circumstances" that were taken into account in the case.

In 2017, Paquette pleaded guilty to assault under the Criminal Code in the case and has since served his sentence.

Paquette read a letter of apology to the victim and her family at Friday’s hearing.