London mayor speaks out against 'sexism, misogyny' in 'FOCO' signs 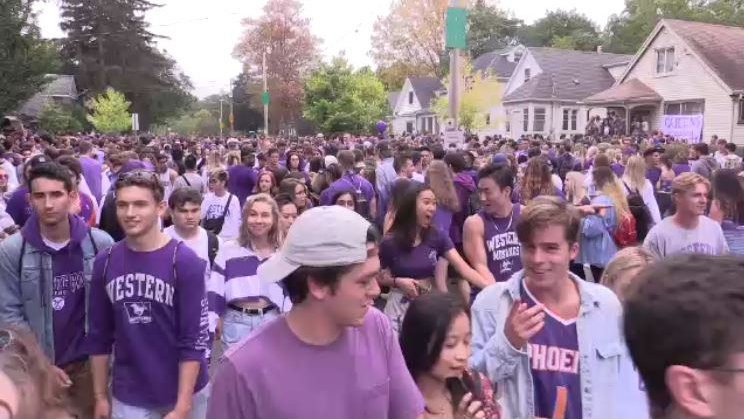 A homemade sign is seen on a house as students gather for 'FOCO' on Broughdale Avenue in London, Ont. on Saturday, Sept. 28, 2019. (Brent Lale/CTV London)

LONDON, Ont. - London Mayor Ed Holder is calling out a number of homemade signs at this past weekend's 'FOCO' party for being sexist, misogynistic and promoting rape culture.

Holder made the comments in a series of Tweets posted Tuesday morning.

The signs, which have become a 'Fake Homecoming' tradition, were made from bed sheets and featured disparaging comments about women.

Holder Tweeted that the city "will not allow young women…to be disrespected, and we will not allow London to be used as a door-mat, nor a poster-child for the ignorant messaging that was on display over the weekend."

Asked what should be done, Holder tells CTV News the students need to "grow up."

"Other students have to step up to those who are the perpetrators and say that just doesn't work, it's lame, it's inappropriate, it's disgusting, stop. I think it's peer pressure because all the rules in the world won't matter unless these people take personal responsibility."

In addition to the size of the Broughdale crowd, what I find equally troubling were messages of sexism, misogyny, and rape culture on full display hanging from the front patios of several houses in the Broughdale area. (1/5) #ldnont

You’ll remember, London City Council became the first in all of Canada to make the safety of women and girls a strategic priority. We take that commitment seriously. (2/5) #ldnont

We will not allow young women - be they students, faculty or otherwise – to be disrespected, and we will not allow London to be used as a door-mat, nor a poster-child for the ignorant messaging that was on display over the weekend. (3/5) #ldnont

I also want to make clear my unequivocal support for the manner in which our first responders conducted themselves on Saturday. Police, Fire, and EMS displayed tremendous professionalism and great restraint. They were firm, but fair. (4/5) #ldnont

I don’t believe it’s helpful to second guess their interactions with members of the crowd on Saturday. They are experts in their field, and I am extremely proud of their efforts. (5/5) #ldnont

Martin Allen is the editor-in-chief of the Western Gazette, Western's official student newspaper, and he shared some examples of what the mayor is addressing:

Police were asking people take signs like this down last year, especially the vulgar ones. #foco pic.twitter.com/jEK91QG7m3

In his letter he praises the work of Western staff and first responders, but says, "It was very upsetting to see a couple of banners in the Broughdale neighbourhoood that demonstrated a lack of respect for women. Casual misogyny, passed off as a joke, is always corrosive."

He continues that while progress has been made, there continues to be problems with the event and how it impacts area residents and straints the city's resources.