Konrad began following the pair because he didn’t recognize the people going door-to-door. After a couple of blocks the pair called police.

In Konrad’s cell phone video, an officer can be heard asking him, “…are you going to go home and let them do their jobs?”

The pair was with the pro-life group Canadian Centre for Bio-Ethical Reform (CCBR).

According to Blaise Alleyne with CCBR the pair felt he was not maintaining a safe distance while following them.

"Our team repeatedly asked him to stop following them before calling the police," said Alleyne.

After apparently asking him to turn off his video, which Konrad does, but then turns it back on again, the officer goes on to say, “I’m telling you to turn the video off completely and walk home.”

That’s when Konrad says he was handcuffed and place in a police car, and told he would be charged with harassment and stalking.

Konrad tells CTV News, “He said, ‘You can leave, you don’t want to be arrested do you?’ And I said, ‘No one wants to be arrested.’”

After a short drive he was let out and he claims he was told the charges were dropped.

London police tell CTV News no charges were filed and they could not comment on the incident.

The pamphlets involved, left by a pro-life group, depict graphic photos of fetuses. 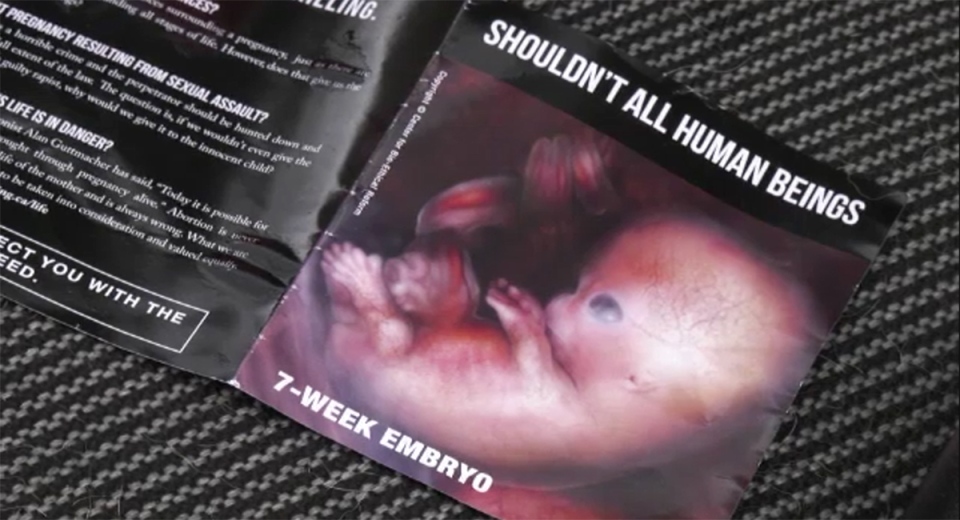 The exterior of an anti-abortion pamphlet distributed in London, Ont. on Thursday, Oct. 2, 2020. CTV News is not showing the graphic images inside. (Marek Sutherland / CTV News)

Konrad says, “As I was coming out of my house, my front door, I noticed the pamphlet that was in the door…The fact that it was something so graphic, that’s what I really object to.”

Konrad attempted to return the flyer to the pair distributing them and was told they couldn’t take it back due to COVID-19, that’s when he began following and recording them along Maitland Avenue.

“I decided to take out my phone because I wanted to see what he was doing, and I wanted to document it in a sense, so my neighbours could see who was putting materials in their mailbox,” Konrad says.

The issue of the graphic literature has gotten the attention of City Hall, and Ward 6 Councillor Phil Squire says they are looking at a bylaw.

But warns, they can’t target a single group, “If we were going to prevent flyers from being delivered to houses for people who didn’t want them, that would probably include all flyers.”