A young raccoon got into a bit of jam on Wednesday after scaling the outside of the RBC building in downtown London.

A crowd had gathered on Richmond and King Streets after a raccoon climbed what looked like two storeys up the side of the building.

Some were holding a blanket to catch the raccoon in case it fell while others called for help.

London police, the fire department and animal control all arrived to help.

But a London Hydro crew was eventually called in and used a boom lift to rescue the animal. 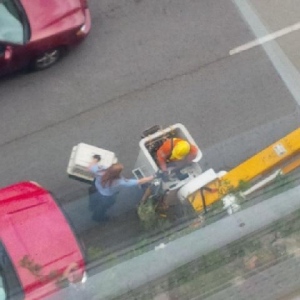