London gets one of 15 approved overdose prevention sites 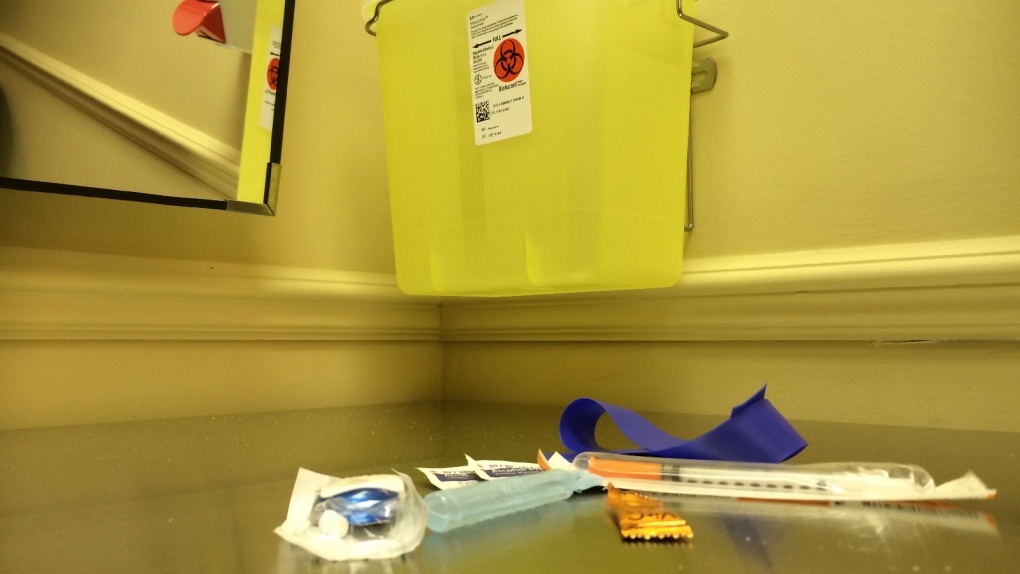 Supplies are seen at the temporary supervised injection site on Clarence St. in Ottawa that opened on Tuesday, Sept. 26, 2017.

TORONTO -- Fifteen overdose-prevention sites across Ontario have been approved for operation under a new model, the provincial government announced Friday in a decision critics called a disaster because six previously licenced sites weren't given the green light.

The government said at least three existing sites that weren't approved would start winding down while three others were under review. Licences for all existing sites were set to expire on Sunday.

The aim of the newly approved facilities, to be called "consumption and treatment services" sites, is to ensure those struggling with drug addiction can get supports that include rehabilitation as well as a safe place to use their drugs.

"Our government takes the opioids crisis very seriously," Health Minister Christine Elliott said in a statement. "(The sites) will continue to save lives by preventing overdoses and connecting people to primary care, treatment, rehabilitation and other health and social services to ensure those struggling with drug addiction get the help they need."

The approved sites will operate in high-needs communities, with six of them in Toronto and three in Ottawa. Other cities -- London, Guelph, Hamilton, Kingston, St. Catharines and Thunder Bay -- will each have one, the government said.

The province also said it would continue to accept applications from interested organizations for more sites.

Gillian Kolla, with the Toronto Overdose Prevention Society called it a major step backward to be cutting back on sites that were open.

"This is an absolute disaster for the province of Ontario," Kolla said. "This is a cut, make no mistake, this is a massive cut."

Among those not approved, Kolla said, was The Works run by Toronto Public Health, which sees 3,000 visits every month -- the most used -- and other smaller sites that help vulnerable people such as homeless women.

"This is absolutely horrible," Kolla said.

A spokeswoman for Elliott said The Works site is being reviewed further, as are two sites in London that were not open.

Latest figures indicate more than 629 Ontarians died from opioid overdoses in the first six months of last year, according to Public Health Ontario -- an increase of 80 over the year-before period.

In addition, there were 6,688 opioid-related emergency department visits in the province in the first nine months of 2018 and another 1,544 hospitalizations.

Licences for existing overdose prevention sites had been set to expire on Jan. 31 but were extended to March 31 pending review of applications for sites under the government's new model. The 15 approved sites come from 21 applications. The government has earmarked $31 million in annual funding.

In announcing changes to the overdose prevention model, Elliott said the sites help reduce drug-related deaths and lower the rate of public drug use.

"The evidence clearly demonstrated that these sites were necessary," Elliott has said. "(But) we felt the previous government took some of the steps but really didn't have that focus on rehabilitation and treatment that we think is necessary."

Both the Opposition New Democrats and the Green party criticized the government's announcement Friday.

"The opioid crisis in Ontario is getting worse," the NDP's Bhutila Karpoche said in a statement. "Twenty-one overdose prevention sites was never going to be enough to meet the need (and) it's simply unconscionable for the Ford Conservatives to literally put people's lives at risk by denying approval to six."

"It is shocking that places like Waterloo Region, which saw a huge spike to 106 suspected overdoses in February, have been blocked from providing life-saving support," Schreiner said in a statement.

In London: The Regional HIV/AIDS Connection and Middlesex London Health Unit site on King Street is among the locations approved.