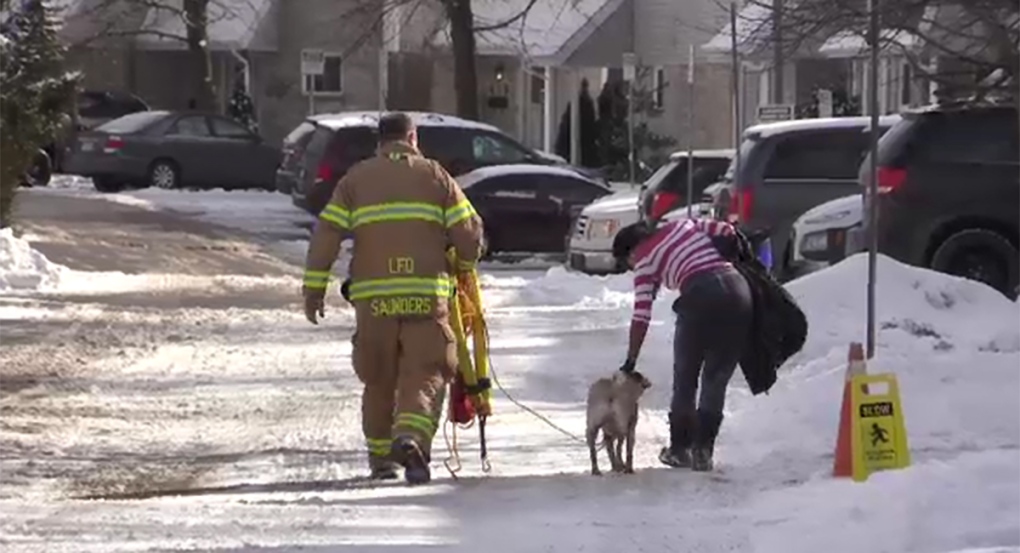 A London firefighter escorts a pug and its owner home after the dog jumped in the Thames River Wednesday, Jan. 27, 2021. (Brent Lale / CTV News)

LONDON, ONT. -- A London woman is happy her dog is alive after it jumped into the Thames River in the east end of the city Wednesday morning.

The London Fire Department Marine Rescue Team was called in after reports the pug fell into the water behind East Park Golf Course.

A firefighter on scene told CTV News the dog saw a duck in the water and jumped in, but they were lucky it got caught up on some ice near the shore.

"The dog was found up river from where we were," says Karl Robb, assistant team leader with the Marine Rescue Team.

"We dispatched one to take the flow of the river, the other went the other way and that was the crew that found it."

The dog's owner was thrilled her pet was safe but declined to speak about the incident saying, "I just want to be with my dog and make sure it gets warm."

It's another reminder that going near the water's edge is never safe.

"Right now the river is moving fast, and there are ice chunks it and it draws the dogs in," says Robb.

"They get playful and want to jump in the water and next thing you know they are floating away. It's important to stay from the river for dogs and kids. No ice is safe ice."