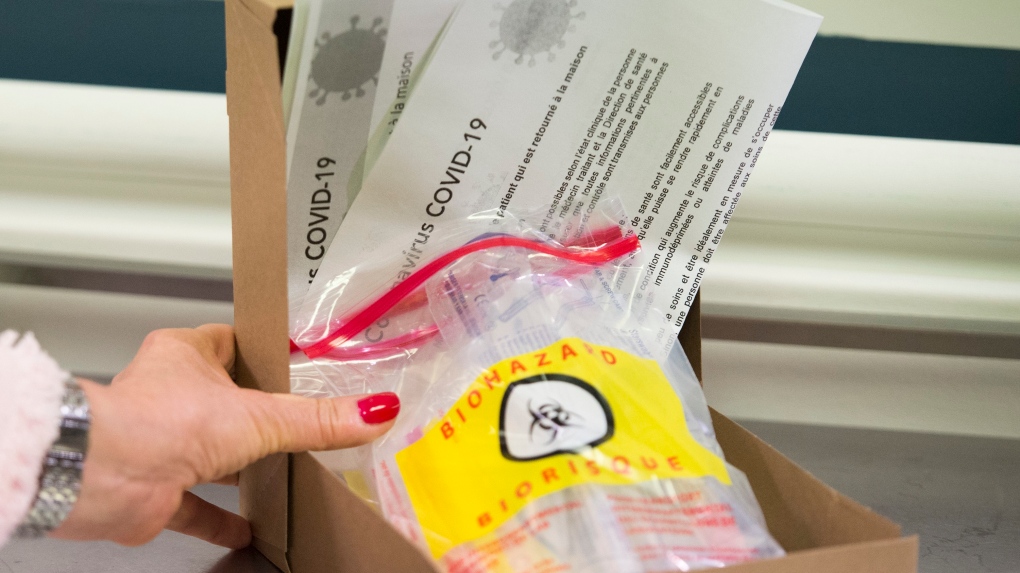 A COVID-19 test kit is shown at a coronavirus evaluation clinic in Montreal, Tuesday, March 10, 2020. THE CANADIAN PRESS/Graham Hughes

MIDDLESEX COUNTY, ONT. -- There were three new deaths in the Middlesex-London region in the last 24 hours, all in long-term care or retirement homes.

That brings the total number of deaths in the region as of Thursday to 26, with 12 of those in seniors' homes.

The Middlesex-London Health Unit (MLHU) said there were also was also four new cases, bringing the total in the region to 347, including 92 at long-term care and retirement homes.

MLHU Medical Officer of Health Dr. Chris Mackie says that by end-of-day Friday all residents and staff in long-term care homes will have been tested, as required by the province.

On a positive note, two more outbreaks at seniors' homes have been declared over, for a total of three, leaving just six outbreaks in the region.

One of those outbreaks was declared in Victoria Hospital's Oncology Unit on Wednesday, though it's unclear how many people may be affected. An outbreak is declared if there is a single case.

An additional eight people have also recovered, bringing the total number of resolved cases to 163.

"The steps that people are taking to ensure people are social distancing are having a huge impact," Mackie says, and they must continue.

Sarnia-Lambton Public Health is reporting nine new confirmed cases, bringing the total on Thursday to 159. There were no new deaths, but four more people have recovered, bringing that total to 66.

In Oxford and Elgin counties, there are two new cases, bringing the total there to 53, including 18 recovered cases, two more than the previous day. There were no new deaths reported Thursday.

Southwestern Public Health has also confirmed a positive test in a worker at a St. Thomas retirement home.

There were no new cases and no new deaths reported in Huron-Perth on Thursday, leaving the totals at 39 cases and four deaths. Huron Perth Public Health reported that one more person has recovered in the last 24 hours, bringing that total to 22.

In Grey-Bruce, two new cases were reported Wednesday, putting the total at 66. There was no change in the number of recovered cases, which remains at 22 and there continues to be no deaths in the region.