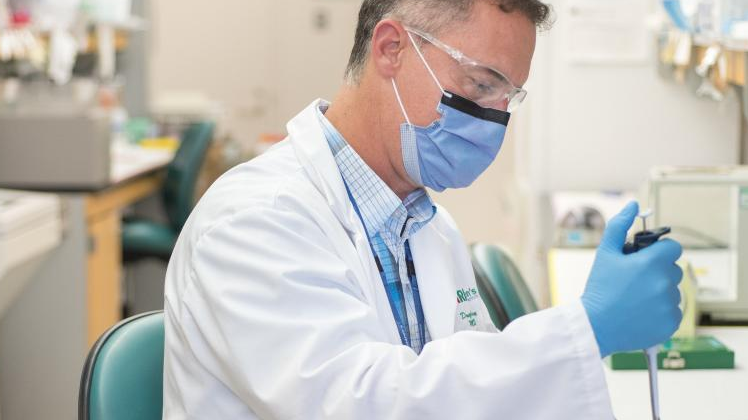 LONDON, ONT. -- A local research team says it has taken major steps in "answering some of the biggest COVID-19 questions."

The first study has identified six molecules that can be used as biomarkers to predict how severely ill a patient will become, researchers say.

In the second study, the team says it is the first to reveal a new mechanism causing blood clots in COVID-19 patients and potential ways to treat them.

The studies were conducted by analyzing blood samples from critically ill patients at London Health Sciences Centre (LHSC). They build on a growing body of work from the team who were first in the world to profile the body’s immune response to the virus by revealing a separate six molecules that could act as potential targets to treat hyper-inflammation in critically ill patients.

“While the findings need to be validated with larger groups of patients, they could have important implications for treating and studying this disease.”

The researchers say with no proven therapies, many COVID-19 patients admitted to intensive care units (ICUs) do not survive.

The researchers identified six molecules of importance (CLM-1, IL12RB1, CD83, FAM3B, IGFR1R and OPTC). They found that these molecules were elevated in COVID-19 patients who would become even more severely ill.

They also discovered that when measured on a COVID-19 patient’s first day of ICU admission, the molecules could be used to predict which patients will survive following standard ICU treatment.

The team measured 1,161 plasma proteins from the blood of 30 participants: 10 COVID-19 patients and 10 patients with other infections admitted to LHSC’s ICU, as well as 10 healthy control participants.

Blood was drawn on set days of ICU admission, processed in a lab and then analyzed using statistical methods and artificial intelligence.

The team says that predicting a patient’s disease severity can help in a number of ways. It could allow for medical teams to have important conversations with family members, setting goals of care based on the patient’s health and personal wishes.

Medical teams could use the knowledge to mobilize resources more quickly. If they know a patient is at higher risk of death, they may consider intervening sooner despite associated risks.

The team also says it hopes the findings can be used to better design COVID-19 clinical trials by grouping patients based on their risk.

In the second study, researchers looked at a major complication occurring in most critically ill COVID-19 patients is clotting in the lung’s small blood vessels which leads to low oxygen levels in the body.“The reason for this clotting has been unclear.

Most suspect the clotting mechanisms in our blood are put into overdrive and so many clinicians have been treating with anticoagulant therapies like the drug heparin,” says Dr. Fraser. “But we’ve uncovered an entirely different mechanism.”

The team further analyzed the blood samples from their 30 participants, and found evidence to suggest that the inner linings of small blood vessels are becoming damaged and inflamed, making them a welcoming environment for platelets (small blood cells) to stick.

They discovered that COVID-19 patients had elevated levels of three molecules (hyaluronic acid, syndecan-1 and P-selectin.) The first two molecules are products broken down from small hair-like structures (the glycocalyx) which line the inside of the blood vessels.

Their presence suggests the glycocalyx is being damaged with its breakdown products sent into the bloodstream. The presence of P-selectin is also is also significant as this molecule helps to make both platelets and the inner lining of blood vessels adhere to one another.

The team says that two therapies may hold promise for treating blood clots in COVID-19 patients: platelet inhibitors to stop platelets from sticking and molecules to protect and restore the inner lining of blood vessels.

Back-to-school shopping amid COVID-19: What you need for September

Here's how some B.C. schools will operate under COVID-19 safety protocols

Women may have better immune response to COVID-19 than men, study finds

France adds more than 5,000 new coronavirus cases in one day

Coronavirus: This is what frosh week may look like for students this year

COVID-19 lockdowns blocked flu in some places but fall looms

More needs to be done to convince reluctant Canadians to get COVID-19 vaccine, Dr. Tam says

Dr. Abdu Sharkawy: Why not all of my kids are going back to school