'Like you got hit by a transport truck': Worker injured in London, Ont. collapse recovering at home

LONDON, ONT. -- At least two of the workers injured in the London, Ont. building collapse are recovering at home.

The London Health Sciences Centre confirms Peter Harder, the brother of the late Henry Harder was treated and discharged.

And Travis Jaklitsch of New Hamburg, Ont. is now home after suffering severe, but non-life-threatening injuries.

CTV News spoke with Jaklitsch and his wife Kaitlin via Zoom Wednesday morning, and he describes the moment the collapse happened.

"All I heard, it sounded like a train," says Jaklitsch, who was working his last day on the job site."It was a big loud, big scary sound but before you could even react it felt like you got hit by transport truck."

He was working on the third floor of 555 Teeple Terrace doing HVAC work and sheet metal when the building crashed down around him.

"I can remember falling through the floors," says Jaklitsch."I was almost at peace because I felt like that was it. Next thing you know you are stuck under rubble, praying you'll be found."

He was not the person in the cell phone video who was found by fellow construction worker Roland Kovacs. However he says he does recognize him from the job site.

He also remembers the moment first responders freed him from the debris.

Jaklitsch was relieved to learn he was the only one of his team members who was injured. The others were working for the concrete company.

Now he is back home with his wife Kaitlin, but the road to recovery will be long. 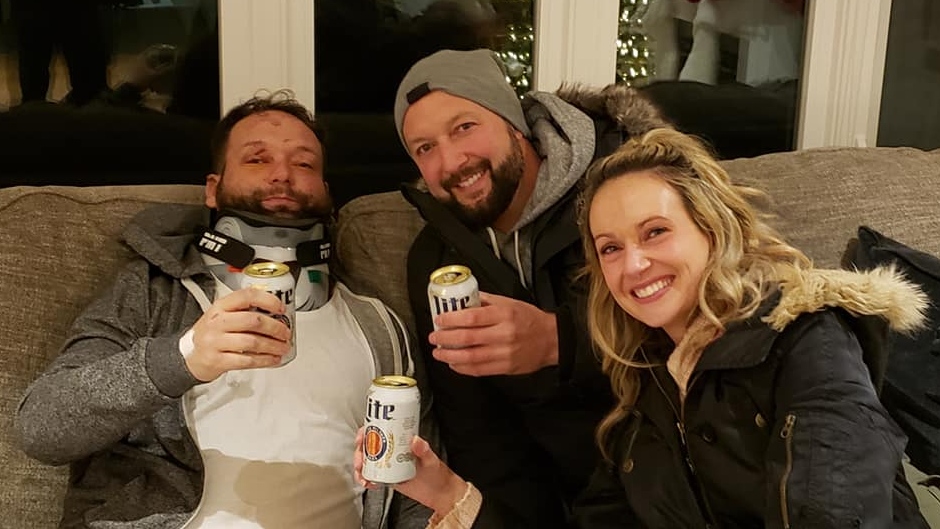 Travis Jaklitsch, left, is recovering at home in New Hamburg, Ont. after being trapped in a building collapse in London, Ont. (Source: Cory Jaklitsch / Facebook)

"He just had successful surgery on his broken ankle and fibula," says Katlin.

"He has three plates, and he has fractured ribs, burns on his face and his back. His back is badly scraped up from the concrete. His eyes were so filled with concrete that I was so worried he wouldn't have vision. He had an eye exam and he could read, so his eyes are already looking amazing. He has three fractures in his spine and neck, but they are all minor enough he will recover."

Like many others, Jaklitsch is hoping to someday get answers as to why the building collapsed.

Until then, he'll start his road to recover feeling all the love and support. "We are overwhelmed," says Jaklitsch.

"The GoFundMe...I wish I could hug and thank everyone personally. The world is full of amazing people and I couldn’t be more thankful."

Doctors have told him he will need to wear the neck brace for at least six weeks, but they say they are taking it one day at a time.

"I'm just so happy to be home, and do the things I never thought I would be able to do again," says Jaklitsch.

The identities of the other two injured workers have not been released.The collapse on Friday killed 26-year-old Henry Harder and 21-year-old John Martens.